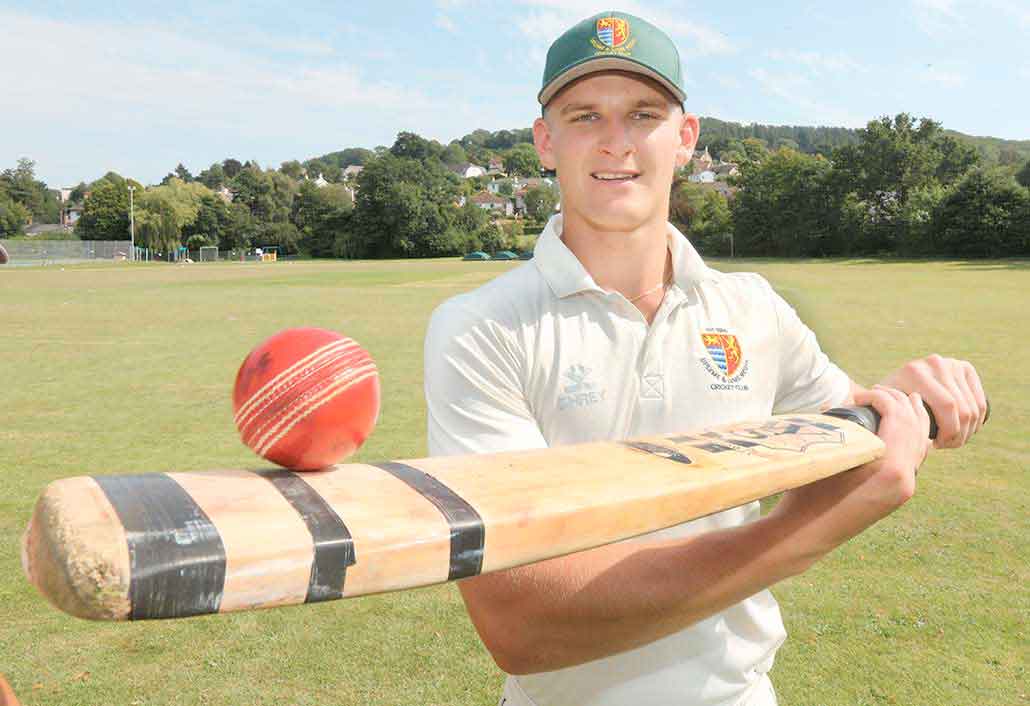 TRIPLE centurion Tyler Wellman was unable to add to his three consecutive 100s for Uplyme & Lyme Regis on Saturday – as he did not get a bat!

But another member of the Wellman sporting dynasty – his cousin, club chairman and skipper Steve Batey – was left to write the headlines in their eight-wicket victory over Axminster Town with a glorious knock of 110.

The victory keeps Uplyme firmly on course to win the Devon East E 3 (Tier 5) mini-league and a place in the  knock-outs.

They completed the double over Axminster Town after winning the toss and electing to field, a decision which meant that Tyler, batting at No 6, was unlikely to get to the crease.

Axminster started well enough and only lost three wickets against a six-man attacking which kept things tight throughout, restricting the visitors to 143 off their 40 overs.

It was a better batting performance from Axminster who were skittled out for 48 runs in the first outing between the two sides at Cloakham Lawn.

Batey’s ton was typical of his aggressive approach to batting – he smashed 12 fours and eigth sixes before being caught behind by Paul Miller, Alfie Jacques and Mark Batey weighed in with 14 runs each. They reached the winning total in just 17.4 overs.

Matt Chenery got the two Uplyme wickets – both catches by Paul Miller – but he was cained for 55 runs off five overs.

It’s in the genes!

Following his three consecutive centuries for Uplyme, it emerged that Tyler is a distant cousin on his mother’s side of former England Test captain Ken Barrington, so it might be that his batting skills are in his genes.

No one of local cricket circles can remember any batsmen scoring three consecutive centuries and there is talk of some of the clubs that play at a higher standard in the Devon League are interested in acquiring his services.

But Uplyme have a great team spirit and are confident that Tyler will be playing for them next season when they hope they can progress up the divisions, assuming that cricket returns to normal.

His teammates have noticed how Tyler has improved his technique since spending a year with Uplyme’s twin club, the Deepdene Bears, in Melbourne in 2018.

So has any player even come close to matching Tyler’s achievement at Uplyme? We asked Michael Denham, one of the club’s most stylish batsmen who scored a ton at Lords, the home of cricket, when Uplyme celebrated their 100th anniversary.

He told LymeOnline that he thought there were only three other batsmen capable of hitting three consecutive centuries – Bob Mason, his son Andy and Paul Apanasiweiz – but none of them did!

The win over Axminster cements Uplyme’s position at the top of the East E (Tier 5) division with 72 points, 20 points ahead of their nearest rivals, Honiton.

This coming Saturday (August 22) Uplyme are away to Honiton (1pm start).

A BRILLIANT century by Bruce Maltby steered Uplyme and Lyme Regis to their second victory of the season at home to Clyst St George on Saturday. […]

Devon league cricket to start on May 1st

WITH an end to the recreational sporting lockdown in sight, it looks hopeful that local cricket can start again on May 1. […]

Trying not to touch a nerve with temperamental Beefy

ASKING temperamental Ian Botham to put his bat behind his head got me a strange look, but he did it anyway.
[…]