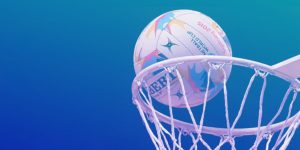 THE Honiton Netball League fixtures were back to normal on Monday, September 16 after rain affected games being able to be played the previous week.

Division 1 games got off to a thrilling start with newly-promoted Sidmouth Netball Club (SNC) Eagles up against Signs South West (SSW).

The young Eagles side are used to being undefeated when playing in Division 2. However, SSW put a stop to that with their first game in Division 1 and the winter season.

After an extremely closely contested match, it ended with only one goal between the two teams with SSW winning 42-41.

Emily Rich, the Eagles’ goal attack, put on a sterling performance when shooting and attacking whilst Signs’ goal keeper, Daisy Graysmark, picked up the player of the match award for her excellent defensive display.

It was another close game for the Eagles’ club-mates, SNC Toucans. The more experienced Sidmouth side had their first winter match against the Panthers, who took a clear lead after the first quarter, having scored double the amount of goals of the Toucans.

However, the Toucans developed their attacking tactics in the second quarter and managed to be just one goal behind their opposition come half-time.

In the third quarter, with some excellent all-over-court play from Sara Pearce as centre, Panthers were able to once again pull ahead, this time by five goals. The Panthers maintained this standard of play and, despite Toucan’s best efforts and some particularly great play from their goal attack, Anna Rowson, they were unable to pull away with a win. The final score was 25-21 to the Panthers.

The final Division 1 match was between Blackdown and Jaguars. From the first whistle, Blackdown showed what a strong side they have this season and, by the end of the match, 42 goals had been netted in comparison to Jaguars’ 25.

Nikki Perry picked up the player of the match award for Blackdown whilst the accolade went to Maisie McCarthy for the Jaguars. Throughout the game, Blackdown showed excellent sportswomanship which was reflected in their fair play score of an impeccable 10.

Two games were played in Division 2 this week. Cranbrook-based Black Arrows defeated Sidmouth Tridents, 24-16 with Vicky Franks picking up the player of the match award for the Arrows and goal defence Cassie Beer for the Tridents.

Meanwhile, Slick Chicks came out as winners in their game against Tornadoes 31-25. Their goal attack Grace Lambert and Tornadoes’ goalkeeper Harriet Squires were the recipients of their player of the match awards.

In Division 3, Jurassics picked up their second win from their second game, meaning they sit at the top of the leaderboard. They won 25-17 over Honiton Netball Club’s Honeyz and both goalkeepers, Liz Shepherd for Jurassics and Sarah Green for Honeyz, shone throughout the match and both were awarded the player of the match titles. 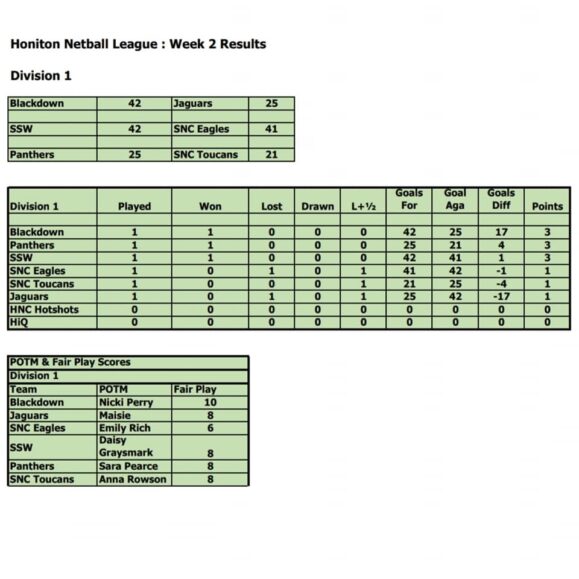 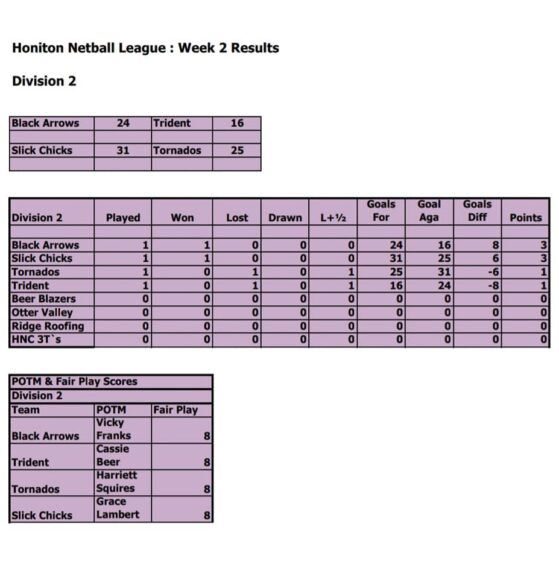 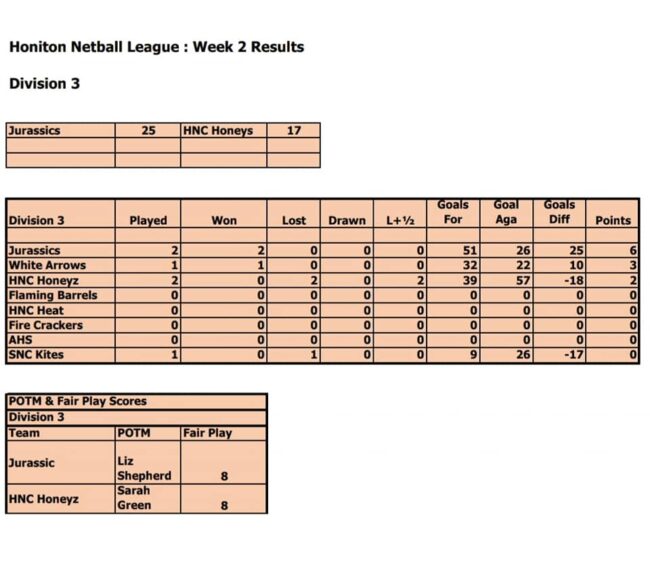 DUE to poor weather, the outdoor fixtures for Honiton Netball League were called off on Monday, June 10 and will be played at a later date. Consequently, only two indoor games were able to take place at Colyton’s LED this week. […]