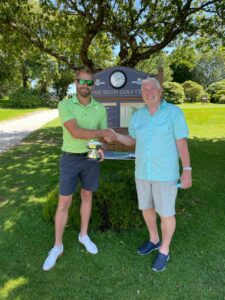 THE second round of the Lyme Regis Golf Club championship was won by Steve Mudford, seen here receiving the trophy from captain Arthur Danies.

Steve won the gross competition with a score of 148, with Jason Lindley coming second on 152 and Ian Mudford, Steve’s brother, taking third place with 153.

The net score competition was won by Jason Lindley with a score of 138, with Ali Rattenbury (141) second and  Reece McGinley (142) third.

The final day was played in glorious sunshine and the players would like to thank the green keepers for presenting the golf course in fantastic condition.

On the 25th occasion competing for the Centenary Sword at Lyme Regis Golf Club,  it was fitting that it was a very close finish as both Barry Ebdon and Tony Johnstone both scored 43 points. […]

MARK Scott was in no mood for compromise as he started his round with a three- point par, ended with a three-point birdie and in between scored very well, including a four-pointer on the 14th as he won Division 1 of the Lyme Regis Golf Club November stableford with 40 points. […]

By Richard Jackman The November stableford at Lyme Regis Golf Club had a high turnout and competition was keen as 18 players scored par and better. It was nip and tuck and the top of […]