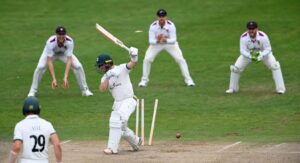 SOMERSET are back at Lord’s for the second successive summer after defeating Worcestershire by 60 runs at Blackfinch New Road to seal a spot in the Bob Willis Trophy final.

The Royal London One-Day Cup holders set the home side a 245 target and dismissed them for 184 mid-way through the afternoon session.

Lewis Gregory and Josh Davey with three wickets apiece were the main architects of Worcestershire’s downfall today but it was another impressive team performance and put the icing on a hugely successful Trophy campaign.

Somerset won four out of five matches and were only denied almost certain victory by the rain in the other game against Warwickshire at Edgbaston.

The tally of 97 points is comfortably the highest by any county.

The bedrock of their success with the ball have been Craig Overton and Davey with a combined tally of more than 50 wickets in the competition.

Tom Abell (352 runs) and first innings century-maker Tom Lammonby (343) have been the main contributors with the bat amongst a total of five different century-makers.

Worcestershire resumed in gloomy light and, following a short interruption, England paceman Lewis Gregory trapped Tom Fell (20) after he looked to work a delivery to leg.

Jack Haynes (30) was guilty of a misjudgement against Josh Davey and offered no shot as he was leg before for 30 with the total 96 for four in the 44th over.

Riki Wessels brought the 100 up with a lofted off-drive for four off Jack Brooks but then tamely surrendered his wicket to Davey.

He straight drove him to the boundary but then on nine tried to pull the next ball – a shortish delivery – and only succeeded in picking out Eddie Byrom at mid-wicket.

The scales tipped firmly in Somerset’s favour when Brett D’Oliveira (28) went lbw to the last ball before lunch after Overton returned to the attack.

But skipper Joe Leach and Ben Cox counter-attacked effectively in adding 44 before the former, on 17, became the fourth lbw victim of the day – this time to Jack Brooks.

Dillon Pennington (4) departed in the same manner and the game was wrapped up when Cox (32) was caught behind off Davey.