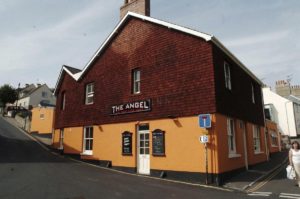 PART of my duties when I first worked in a newspaper office on work experience at the Bridport News (circa 1963) was to type in the skittles results. No emails in those days, of course, so all the scores and league tables had to be typed in by hand.

As I lived in Lyme, legendary sports editor Roger Bailey always allowed me to type in the Lyme Regis Skittles League results.

Skittles was the main winter pastime for the sporting men of Lyme Regis. A couple of years after my work experience at the “Wip-Wop”, as the Bridport News was affectionately referred to, I had started work full-time as a reporter for the Express & Echo in Exeter.

By this time I was 17 years old and playing skittles regularly in Lyme after travelling home from Exeter on the train before the Bluebell Line was closed by the Beeching axe in 1966.

My mates and I, all around the same age, formed a team called “The Psychedelic Ravers” (very appropriate for the 1960s) and we chose the Angel Inn to be our home alley. There was a good reason for this; landlord Ted Oaks turned a blind eye to the fact none of us were old enough to drink! I well remember my first pint at The Angel – a pint of Black and Tan for 1s. 1d – which soon ended up in the River Lym!

Today there are only two alleys in Lyme – the Ship Inn and the Rock Point, which came later, as did the Pilot Boat which is now closed for a major refit. With exception of the Coach & Horses (also closed), the out-of-town alleys are still in use.

“The Psychedelic Ravers” were greeted with some dismay by those who had been skittling for years. To be honest we were a bit too loud for their liking and far too cocky when we won, a rare occasion. After a home game we would return to the public bar at the Angel where there was often a lock-in and a sing-song late into the night.

One of the biggest sporting social occasions in Lyme in those days was the Skittle League annual dinner, usually held in the ballroom at the Royal Lion where all the cups were presented. It was a men-only gathering – ladies skittles in Lyme came many years later.

The first dinner attended by the “Psychedelic Ravers” was a real eye-opener, memorable because two well-known brothers went to fight before dinner was served, knocking over the grandfather clock, its internal workings spilling out onto the floor. Landlord Bob Dunne was not best pleased.

It was tradition at the dinner for all the cup winners to fill their cups with cocktails of strong liquor and then pass them to all those in attendance for a gulp. This resulted in a number of our team being carried home!

For games out of town we would hire Lou Wakeley’s taxi and ten bob in our pockets was enough to get us home, having paid our match fees and enjoyed a pasty and a few pints of Palmers Best.

All these memories came flooding back as I was typing out the Lyme Regis skittles results for the sport section on the LymeOnline website. The league may not be so well patrionised as it was in those days but it is still very buoyant with two men’s divisions and one lades’ despite fewer alleys. And some of the old team names are still competing – Trappers and Miscellaneous among them, the two teams I remember for whom the best skittlers in town were members.

“The Psychedelic Ravers” have long disappeared, although I hear the money collection box, made by carpenter Dick Hodder when he was an apprentice, is still in use. I’ve played occasionally over the years and one season back in the 1980s became doubles champions with Arthur Larcombe from Uplyme.

We all look back on our growing up years through rose-tinted glasses and as I do so I raise a glass to the “Psychedelic Ravers” – Dave Reed, Dick Hodder, Michael Blackmore, Doug Rattenbury, Les Smith, Barry Rattenbury, Terry Holman, Alan Beviss and Howard Williams, sadly not all of whom are still with us.

NO Hopers extended their lead at the top of Lyme Regis Skittles League Men’s Division One with a 39-pin victory over Wreckers, giving them a five-point lead over nearest Rivals Flyers. The Flyers lost ground […]

LYME Regis Skittles League has called an emergency meeting following news that the Ship Inn – the only remaining pub in town with a skittle alley – will close on February 6. […]

TWO of the leading teams in the Men’s Division One of the Lyme Regis Skittles League will compete in the final of one of the organisation’s oldest cup competitions. […]