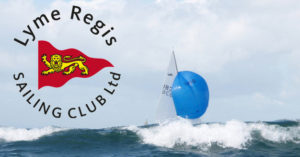 The start times for the 12 competing classes were previously computed, according to their handicap rating. The pursuit race was based on a 2 hour sail for a Phantom, around which start times for each class ranged from the Laser 4.7 at 10.35, to the RS800 49 minutes later.

The aim is for all to finish at one point if all sailed equally well and to their handicap. That, of course, was never going to happen, and watching faster classes creep up on those in front, as well as trying to beat others in their class, while counting the rounds completed for each, kept the race team busy. Sailors could work out their own positioning during the race according to their comparative start time and the boats they passed or were overhauled by.

Six Merlin Rockets, including four visitors with an eye to tuning up for the forthcoming National Championships here in August, took part, and five K1s, all Lyme boats.

The youngest helm, Tom McDonald in his Laser 4.7, was sent off first, sailing alone for 12 minutes up the first beat before the Laser 2000 started: he did well to maintain 3rd position at the end of the first lap, though was soon overtaken by the faster boats during his following 4 laps.

As Rob pointed out in the sailing instructions, there is only one winner, the front man after two hours’ racing.

Who came through to beat the competition? It was well-known Lyme Merlin Rocket helm Jon Turner, crewed by Katie Frost, with no other Merlins in the top 11.

Pioneers such as Pete Goss are what makes Britain great

THE year was 2000 and international hero and inspirational sailor, Pete Goss, had built the largest ocean racing catamaran ever seen in his ground-breaking workshop in Totnes, on the River Dart. […]

FOLLOWING the government’s easing of lockdown restrictions, some boats will be able to start operating from Lyme Regis harbour as of today (May 13).  […]