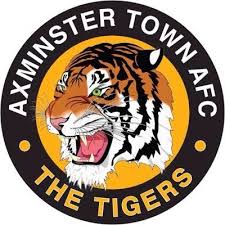 AXMINSTER travelled to The Spurs knowing that they were going to have a tough afternoon as the home-side have made a number of significant new signings in recent weeks.  The Tigers made the trip to South Devon without Callum Garrett (injury) and hot shot Ashley Small (holiday), but welcomed back influential midfielder Ben Allen who missed last week’s game. The travelling side also included talented under-16 player Charlie Bye in the squad.

Axminster started on the front foot with the lions share of possession in the early stages.  The first clear chance of the game fell to the visitors on the 25th minute when left back Nathan Antat picked up a loose ball 20 yards out.  Antat hit a fierce shot that was acrobatically dealt with by former Southampton and Torquay Utd youth team goal keeper Neil Osbourne.

The home-side managed to get in behind Axminster’s back line numerous times but found Tigers custodian Ashley Smith in deviant mood,Smith, having to be alert on several occasions.  The final 15 minutes of the half was very scrappy, but on the 40th minute with his only chance of the half Tony Pinder scored one of the best goals you are likely to see at this level. Pinder, with his back to goal and with the opposing centre-back tightly marking him on the edge of the 18 yard box, flicked the ball to the right of the defender then spinning off to the left of his marker (all in one movement)  half-volleyed past the stunned Osbourne – a carbon copy of Dennis Bergkamp’s effort for Arsenal against Newcastle in 2002.

Newton Abbot came flying out the traps in the second half putting the Tigers’ backline under some serious aerial pressure, but were finding centre-backs Cameron Vere and joint boss Jon Hurford too experienced to expose them with route one tactics.

For long periods Axminster were camped in their own half and had to weather the storm, getting good numbers behind the ball and then looking to counter attack the rampant Spurs.  The longer the game went on the harder it was for the Tigers to get out of their half.  On the 70th minute Axminster introduced Bye for his first team debut and this paid dividends as Bye’s raw pace and work rate was a problem for the home side and gave the visitors a good outlet to ease the pressure.  On the 92nd minute the referee blew the final whistle, putting and end to not the best spectacle but a dogged and resilient display from the Tigers with a touch of magic from the league’s top scorer Pinder to win the contest.

Man of The Match – Cameron Vere