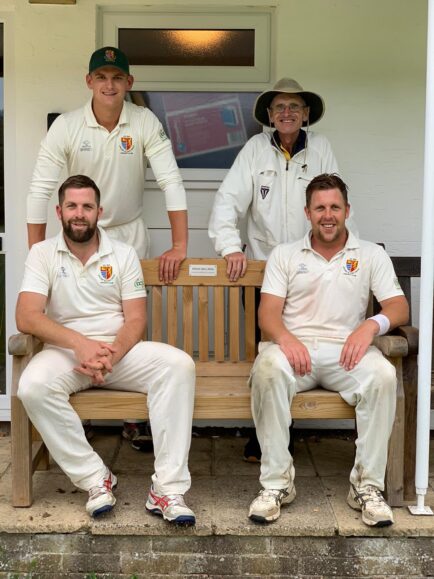 UPLYME and Lyme Regis Cricket Club’s skipper Steve Batey celebrated scoring a century in Saturday’s home match against Axminster by helping to unveil a seat at the club’s pavilion in memory of his grandad.

No one would have been more proud of the manner in which new club chairman Steve has breathed life into the village cricket team, currently top of one of the Devon Cricket League mini-divisions, than his grandad Brian Wellman.

A good sportsman himself, Brian was a lifelong supporter and scorer for the club, and on Saturday the family unveiled a seat donated by Brian’s wife, Kath Wellman.

Steve (seated, right) is joined on the seat by his brother Mark (seated, left), cousin and in-form batsmen Tyler Wellman, another of Brian’s grandsons (standing, left) and Brian’s eldest son, Derek (standing, right), who is also secretary of the cricket club.

Uplyme too strong for Crewkerne in 20-over friendly

UPLYME and Lyme Regis continued their impressive form with a six-wicket victory over Crewkerne in a 20-over friendly at the King George V playing field last evening (Wednesday). […]

All may look quiet and calm at the Uplyme & Lyme Regis cricket ground, but beneath the surface, the club is busy preparing for big changes as the 2018 season approaches. 2017 was challenging for […]