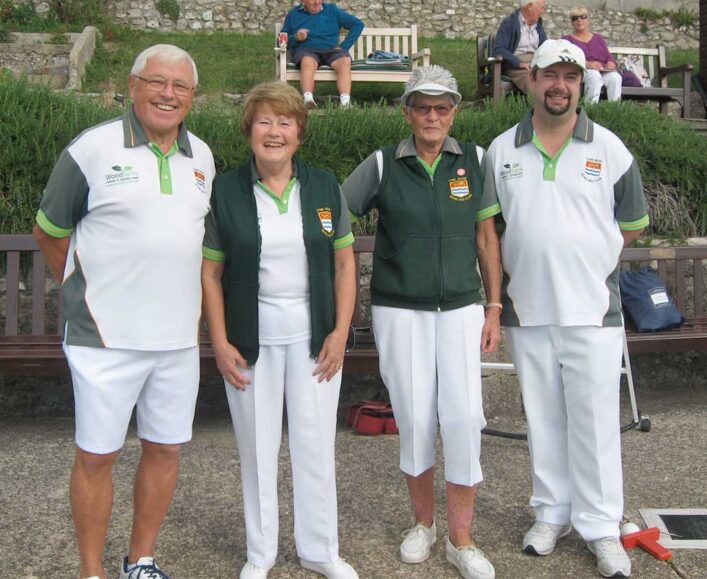 LYME Regis Bowling Club staged its finals weekend with some new names on the trophies.

Results were as follows (provided by Paul Moffitt):

It is Paul’s default setting to be in the championship final but this year it was Barry Rattenbury that won the day. Paul never looked comfortable on rink 2 struggling with both line and weight you usually expect when he plays. After a brief rally, and reducing the deficit to 11-15, Barry held his nerve, kept drawing and was a comfortable winner in the end.

This was a contest between Paul Pomeroy, still smarting from his earlier defeat, against Allan Weech or competitions secretary. Allan may have feared that he would reap the whirlwind but instead played steadily to hold Paul at 7-7 after 12 ends. Unfortunately for Allan, Paul found his true form and denied Allan a further shot to win by 17-7.

Steve struggled to find his true form and allowed Charlie to settle into an easy drawing rhythm early in the game. Charlie grew in confidence as the game progressed and was a comfortable winner at 21-11.

This was without a doubt the most enthralling game of the first day. At 20-6 down Allan and Don looked dead and buried but, with the arrival of some live music emanating from the Power Boat Club the pair became re-energised. Allan started finding the jack, Don’s weighted woods were finding their target and the deficit started to disappear.

Try as hard as they could, Paul and Roger had no answer to this surge and suddenly found themselves all square at 21-21 with one end to go. Despite some desperate and near miss bowling from Paul and Roger, Allan and Don hung on to a single shot for the match and total disbelief from the spectators.

This match saw the first upset of the day, as the much fancied and in form Chris Barber was comprehensively out-bowled by Jean Kesterton. Jean managed to lead from start to finish and was good value for her 15-8 win.

If the form book was to be believed, this match should have favoured Ann and Paul, and so it proved. Ann bowled steadily at the front and was always too hot for Jasmin who, in my opinion, was bowling the wrong hand for the first half of the game. When she finally switched, and played the same hand as Ann, she began to have some success.

Whatever Jasmin and Allan attempted, Paul was on top form and sorted out any of the trickier heads with some superb draw bowling. Throughout this game, Allan struggled to find his line and his few successes were with his well-directed woods. In the end, it was a driven wood from Allan that went astray and let Ann and Paul pick up a 7 which basically sealed the end result.

Nola got off to a confident start at 5-1 after 3 ends but, Diana countered well and was 10-5 up after 7 ends. At this point Nola turned the screw with some fine draw bowling whereas Diana’s game seemed to go ‘walkabout’ from which she never recovered. Nola only allowed Diana 2 more shots in this match and was a comfortable winner at 24-12.

Ladies of a certain age contest this competition and, this year, found Nola Stephens competing against ladies captain Pam Weech. Nola raced to a 9-2 lead after 5 ends and looked very much in charge but Pam retaliated to close the gap to 9-11 and it looked like game on. Nola was having none of it and eased to a comfortable 22-15 win.

This was a first for finals weekend as the final is usually contested on the same day as the preliminary rounds. This trophy is contested by individuals who have not won a singles event of any description. As such, this is probably the only trophy that can only be won once.

This year that accolade fell to Chris Pomeroy who, with her league experience, was just too wily for Lorna who will have to develop her backhand game if she is to compete at this level. This was a game played in a very friendly and, at times, humorous manner and was a joy to watch.

After the relatively balmy conditions on Saturday, Sunday was bitterly cold with a biting wind. A good turnout of club members braved the chill to support the players.

Results from Sunday were as follows:

Ann got off to a strong start, soon leading by 6-2 but, on the 7th end, Diana moved the jack sideways and Ann failed to adjust her line giving Diana a 3 count and a slender lead at 7-6. For the next 14 ends Diana was never behind but Ann fought back, after dropping a 4, to level the scores at 19 all after 22 ends.

Ann held her nerve, picking up the two shots required for victory on the 23rd. Ann will be the first to admit that she played well below her best and was fortunate to run out the winner after a very spirited performance from Diana.

The final was played over 5 sets, with Geoff Clode winning over Roger Legg by 3 sets to 1. Roger stormed off in the first set winning it by 7-0. After that, Geoff sussed out the green and never looked in trouble winning the next 3 sets 7-2; 7-0 & 7-4.

Two very experienced skips in Nola Stephens and Chris Barber were paired with relative novices in Virginia Henson and Avril Sherring respectively. Both leads performed admirably with Avril just having the edge giving Chris room to capitalise and the pair were never behind until the 20th end when Virginia and Nola drew level at 18-18.

The highlight of this game for me was on the 12th end when Nola drew 3 perfect woods to a jack that was just inches from the ditch. So all square going into the final end and Virginia has bowled a superb wood just behind the jack. With her last wood Chris managed, somehow, to get a nudge on one of Avril’s short woods and narrowly pushed it in for shot and the match.

This was Alan’s third attempt this weekend to get his hands on a trophy. After 14 ends, there was nothing to separate these two as the score to-an-fro’d between the pair. On the 16th end Alan picked up a 4 giving him a healthy 13-7 lead, which he never relinquished.

This was Nola’s fourth game of the weekend and, being paired with fast-improving Barry Driscoll, would appear to be the stronger pair. This in fact proved to be the case with Nola and Barry never being behind but Jasmine and Mike did tie the game up at 9-9 after 9 ends. Despite some good leading at times from Jasmine and some canny shots from the experienced Mike Knight, Barry and Nola were able to close the game out with comparative ease.

The Allmans, who have won this title on five previous occasions, were riding their luck in the early ends as Chris and Steve seemed to be finding all the gaps whilst Ann and Trevor seemed to filling them. The Pomeroys were 19-9 down after 16 ends and Steve was looking dispirited but, a revival of fortunes and they were back within 4 shots 4 ends later. Eventually, the Pomeroys ran out of ends and gave the Allmans their 6th married couples title.

About Francesca Evans 2520 Articles
Francesca grew up in Lyme Regis and has worked in community journalism in the area since 2011, having gained a First Class Honours degree in journalism and her NCTJ qualifications at Southampton Solent University.
Instagram Twitter

PRIDE of place at Lyme Regis Bowls Club this week goes to the men from Lyme 2 who managed a terrific 8-2 win against, arguably, the strongest team in the 1st division, Bridport. […]