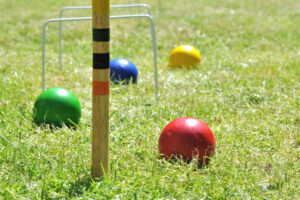 Huw Rees captained the Lym Valley team in the absence of David Brook-Smith, who had contracted Covid a few days before, and opened with a strong win in the morning singles.

However, the doubles match was won convincingly by Taunton, as was the other singles so we went into lunch 2-1 down.

In the afternoon singles Huw came out on top again in a close fought match 16-15, and Stan Curran won convincingly 23-12, but Taunton won the other two singles to take the match 4-3. The Uplyme team looks forward to the return match at Taunton in late August

If you are interested in learning about Croquet why not consider coming along to the Wednesday morning coaching class. Contact the Secretary on lvcc@gmail.com

LYM Valley Croquet Club had an enjoyable day’s play at Camerton & Peasedown Croquet Club near Radstock in the SW Federation Short Croquet League. With 16 games, each taking 75 minutes, it was a long […]

MEMBERS of Lym Valley Croquet Club took part in an annual competition in memory of their late president, Bill Simpson, on Monday, September 4. […]

A TEAM of four from Lym Valley Croquet Club travelled to Poole for a SW Croquet Federation League match with East Dorset Croquet Club. The weather was mixed but so was their croquet as they […]