WITH the rain holding off on Monday, June 17, the Honiton Netball League summer games could resume after rain stopped play the previous week.

This meant that 10 matches could be played in Honiton and Colyton.

Hi Q were the team that secured the biggest goal difference (33 goals) after beating Sidmouth Trident 56-23. Ridge Roofing defeated HNC Honeyz by 30 goals with the final score being 51-21 and Beer Blazers won by a clear 26 goals ahead of Cranbrook White Arrows at 44-18.

Beer Blazers continue to sit at the top of the table having played four games, winning all four and having the highest goal difference; they are also a game in hand.

Close behind are Jaguars who have also played and won all four of their matches after winning their game against ONC Fire Crackers, 32-19.

For the second week running, Blackdown narrowly missed out on three points after being just one goal behind their opposition, Sidmouth Toucans.

By the end of the first quarter, both teams were drawing 4-4 but by half time the Sidmouth side had taken the lead with 11 goals to Blackdown’s eight.

The third quarter was Blackdown’s power play quarter, allowing them to steam ahead as each goal scored was worth double and they then became the leaders, ending the third quarter 22-16.

It was still all to play for with Toucan’s power play quarter remaining. It was goal-for-goal action in the final minutes, but Toucan’s just about pipped Blackdown to the post at 28-27.

Panthers and Slick Chicks also had a very close game. The ball found its way back and forth up the court with both teams made valuable interceptions, turning them over to goals.

By half time, both teams had a taste of leading the game by one goal each. Alike to the Blackdown and Toucan game, both Slick Chicks and Panthers saved their power play quarters for the third and fourth quarter respectively.

Panthers put on a strong defensive display during Slick Chicks’ power play, preventing them from scoring many goals in the round where it mattered most for them. This then assisted Panthers in the final 12 minutes as they had their power play round, so they took full advantage and attacked hard to get a win.

Moments before the whistle blew, Panthers scored their final goal worth two which took them in front to win 31-29.

HNC Hotshots picked up three points from winning their game against their club mates HNC Heat however as Heat scored just over half the amount of HotShots’ goals, they secured one point.

The same can be said for 3Ts, although they missed out on three points when playing Otter Valley, they still picked up one point after losing by only five goals at 34-29. 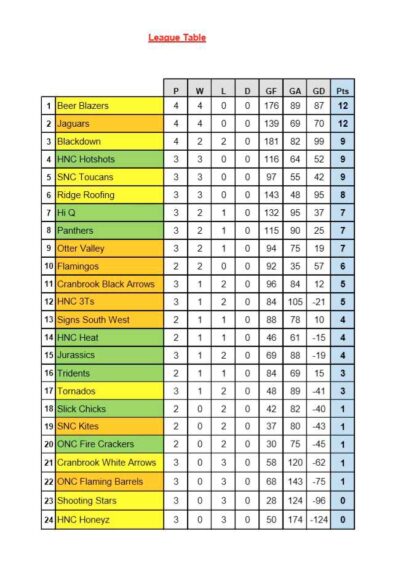