DUE to poor weather, the outdoor fixtures for Honiton Netball League were called off on Monday, June 10 and will be played at a later date. Consequently, only two indoor games were able to take place at Colyton’s LED this week.

It was a close first quarter; the ball went from post to post with few interceptions taking place and the teams ended the first 12 minutes with seven goals each.

In the second quarter, the Black Arrows had truly warmed up and were able to show off a strong defensive display as well as accurate attacking. This teamed with some skilful shooting by Bobbi Richards (goal shooter) allowed them to take the lead, ending the second quarter 13-8.

The third quarter was allocated as Jaguars’ power play quarter, resulting in every goal scored being worth double points. The Jaguars took full advantage of the power play round and stormed ahead, securing goals to take the lead ending this quarter with 24 goals to the Arrows’ 19. Evie Dewhurst (Jaguars’ goal attack) shone in this round with her competent shooting.

It was all to play for in the final quarter, with the Black Arrows having their power play quarter activated for the final 12 minutes. However, Jaguars held on to the strong attacking, defending and shooting they displayed in the third quarter to maintain the lead and secure the three points for a win despite an excellent battle from the Arrows. The final score was 31-27 to Jaguars.

The second match of the night was between Beer Blazers and Blackdown – both teams had won both of their previous matches so it was bound to be a close game between them. This was reflected in the first quarter with the teams drawing 9-9 after a clinical 12 minutes for both sides who transitioned well from defending to attacking and then accurate shooting, particularly from the goal attacks of each team – Gemma Langham (Blazers) and Laura Wells (Blackdown).

In the second quarter, the Blazers gave away some turnovers which Blackdown took full advantage of, especially Nikki Perry as goal defence, allowing them to get the ball back into their goal circle and secure a lead of four goals.

Both teams chose the third quarter as their power play round and the game continued to be intense but it followed much of the same pattern of play as the previous quarter – both teams continued to show off fine defensive displays and accurate shooting, however Blackdown’s defenders managed to intercept more balls, allowing them more opportunities to shoot at goal and maintain the four goal gap.

Going into the final quarter, it was all to play for with both teams desperate to secure their third win in three games. Blackdown began to lose their composure slightly which the Blazers benefitted from as they played a calmer, more controlled quarter and Ash Taylor (goal defence) managed to interrupt the Blackdown’s search for the semi-circle on more than one occasion.

This allowed the Blazers to catch up from being four goals down and in the final minutes they managed to put on an excellent attacking streak to take the lead by one goal, securing their third lot of three points in their first three games of the summer season, resulting in them holding onto the top spot of the table. 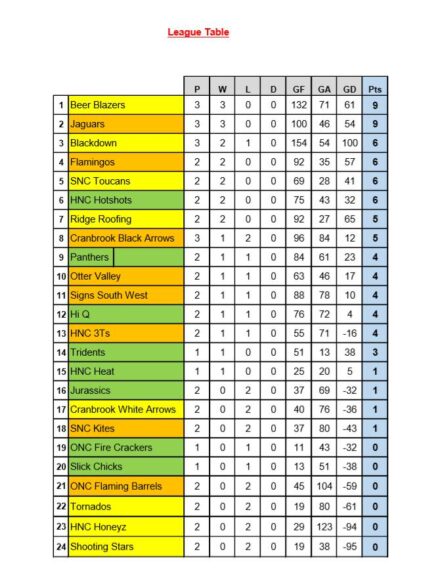