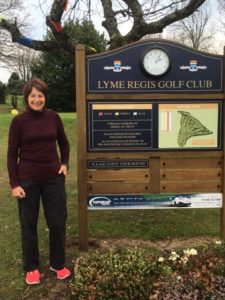 Two points behind, with 74 were Rosie Jackman, Caroline Baker and Ronny Turner.

The highlight of this competition was a first hole-in-one for Jackman on the third hole. So far this year there have been three ‘aces’ the first from Alan Watson then Paul Dike, both in social golf.

The picture shows Rosie Jackman after her hole in one on the third hole in the ladies bowmaker.