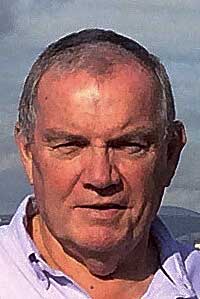 FORMER Lyme Regis Football Club captain Stuart Broom, who has been writing a series on his sporting memories for LymeOnline, chooses his all-time starting line-up from those who have played against his hometown club over the years.

I HAVE to say I really enjoyed writing my footballing memoirs – ‘Once A Seasider, Always A Seasider’ – currently on the LymeOnline website. With the lockdown suddenly throwing all our lives into confusion, it was a tonic.

I had already begun to continue scanning and logging the family photos and newspaper cuttings that so badly needed collating, so when my life-long friend Pip Evans, who owns the paper, asked me to write about the 17 years I played for Lyme Regis FC, captaining the first team for 12 years, it was a real bonus for me.

There’s no doubt in my mind that as you get older reminiscing about bygone days is a great fillip.

With no live sport, television pundits and newspaper journalist have resorted to selecting their best teams across a range of lists from best strikers, national teams, overseas players etc.

It led me onto thinking about some of the great characters that I played with and against, and ultimately who would be in my All-Star XI.

Remember, I started playing competitive football from the age of 13 for Lyme Regis youth team in 1961 and retired in 1978 aged 30, and therefore many of you will not have heard of most of the people mentioned, or indeed would not have been born.

The more I thought about it, the more names popped into my head and the task became more difficult.

For what it’s worth here’s my final line-up in 4-2-4 formation together with some other great players who just missed the cut:

Fearless, strong, and a great all round keeper. A big man with a great attitude, he filled you with confidence and so rarely let you down.

Nick Frampton always reminded me of the late, great John Charles.  Strong in the tackle, fabulous in the air, he was a colossus of a player who like Charles could play anywhere.

Although not a big man for a central defender, Mike Gold was as tough as old boots, and his strength, skill and reading of the game, made him a very difficult opponent.

I’m sure there will be those that will accuse me of nepotism by selecting my brother Robert, but I genuinely believe that he and Rodney Jones deserve recognition. They were only 16 or 17 years old when they broke into the Lyme first team but became an integral part of the Seasiders side that won the First Division (now Premier) championship twice in the late 1950s.

Quick and strong they both always appeared to have time on the ball, something I admired when I later played alongside them.

If I ever had any thoughts that I was a good footballer then I only had to look at Mike Balson. I played against him at school, and with him at Dorset County level. He had everything and was absolutely superb, and you knew even in primary school that he had the potential to be a professional.

He was like Bobby Moore and Franz Beckenbauer rolled into one. He did of course play professionally for Exeter City, and in South Africa and the United States where he also became a top referee and coach.  He would be my captain.

Mike Steed was one of three brothers that played together for Perry Street for a number of years. Whilst Terry and Francis were both no-nonsense defenders, Mike, the youngest was a cultured midfielder that glided around the pitch. I had a lot of time for him for whilst competitive he played the game in the right spirit.

Johnny Welsh is still the same unassuming person today as he was when he whizzed up and down the wing for the Ambers, often leaving me in his wake. If there was one man I dreaded running at me it was Johnny with his quick feet and pace. He could also score goals and didn’t get the full recognition he deserved for his talent.

You couldn’t look further than Barry Bisgrove and Andy Bell to provide the goal power. ‘Banger’ scored over 800 goals in the Perry Street League; a record which I would suggest won’t ever be beaten; whilst ‘Dinger’ wasn’t far behind.

Both had trials with League clubs, Bisgrove with Bristol City and Bell with Exeter, and were lethal at our level. I remember marking Bell in 1977 when Haselbury beat us 14-0 and Dinger scored seven. It was reported that I had a good game; I hate to think what it might have been if I had been off form!

Buster Clapp was a very tricky customer. Although small in stature, he knew how to handle himself and provided a stream of opportunities for a free scoring Crewkerne side.

So there you are. I am sure many of you will disagree with my choices, but that’s what it’s all about – opinions.

Having finished the piece it occurred to me that every one of those listed played the game in a competitive but fair manner. Whilst I take pride in never having even been booked, let alone sent off, I know that can’t be said about all my selections.

However it wasn’t done with any real malice. They played the game in the spirit it was intended and enjoyed it.

FEELING great to be back in action, Uplyme Reserves travelled to Jocelyn Park with probably one of their youngest ever squads. […]

MISSED chances cost Lyme Regis 1st team three points in a crucial promotion clash with neighbours Colyton this afternoon (Saturday) in a game switched from the waterlogged Davey Fort pitch to the G3 surface at Axminster. […]