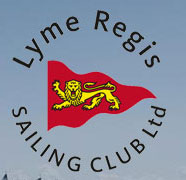 GOOD south west winds winds with Lyme’s familiar rolling waves brought out an enthusiastic fleet of 17 racing dinghies, reminding everyone of what they’d been missing all season.

But it also tested some as the wind increased to F5 through the morning and meant only six completed all three races in the Super Series.

Race Officer Joss Kent noted the challenging conditions, especially for the lighter crews, with nine failing to finish the first race. But that is not to distract from the skill and determination of all the sailors, returning to shore safely at whatever stage.

Out for the first time in their beautifully restored Merlin, familiar as Scorpion sailors, Tim and Sarah Parsons had expected to have to make some gear adjustments, and Joe Joyner was without the weight of his usual crew.

Loving the conditions, Cameron and Darrol Moss flew round the course and gained two firsts, with Jeff Vander Borght taking the second race. Most consistent otherwise were Jerry Rook with Jake Stow, (4,3,2), though Guy Woodhouse and Andy Robinson were well up in close contention early on.

YOUNG people at Lyme Regis Sea School are developing their sailing skills thanks to a council grant to purchase new dinghies. […]

Marooned on Lucy’s Ledge – now that would be a good story!

27th September 2019 Francesca Evans All Over The Town, Blogs 0

IN our last edition I wrote about how summer was well and truly over, but as soon as the paper came out, so did the sunshine! That’s typical in newspaper publishing – not that I have any complaints. […]

KEEN sailors from Lyme Regis can be seen out in the bay again after months on dry land during the coronavirus lockdown.  […]