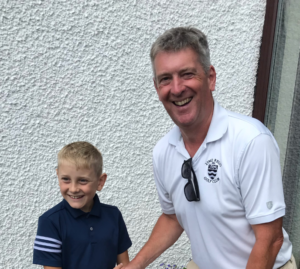 In the ladies’ competition there was no favouritism as  captain Kathy Briggs had an excellent front nine to win with 36 points with Amy Mudford second on 34 and Jane Andrews third on 33.

Division One of the men’s competition, was a tight affair with the top three all finishing on 37 points but on countback, Bob Edmunds, Adrian Morgan and James Phillips finished first, second and third.

Division 2 was different and with the best score of the day, and so winning the captain’s prize, was Neil Smith who finished first with 41 points, with a more up than down round while Patrick Finnemore was only a point behind on 40.  Lee Hill was third on 37. 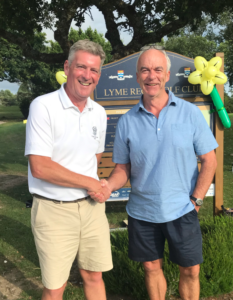 Sunday was a busy day and in the stableford competition, Division 1, Stephen Pitt’s 38 points just got the better of Peter Spiers on 37, with Paul Liston third on 35. John Cleal took Division 2 honours on 37 points, while young Samuel Beviss maintained his podium positioning with 36, just ahead of Ian Drake on countback.

Also on Sunday the Lyme Regis scratch team faced a strong team from Barton-on-Sea in the quarter finals of the Stokes Salver. Home advantage and bouncy conditions clearly helped and after the morning foursomes Lyme held a strong lead of 3 -1 with an impressive point coming from the new pairing of Matt Watson and Mike Mudford.

In the afternoon singles the team pressed home their advantage with solid wins from Ian Mudford, Stuart Wight, James Souter-Philips, Watson and of course the team stalwart David Fidge. The performance of the day came from Steve Mudford who, with defeat looming large, completed the last five holes in six under par to win one up! The scratch team now move into their second semi-final of the season to play Ashley Wood Golf Club.

The rearranged Gordon Putter medal competition was won by John Toates as he came in with a nett 69, averaging gross three on all par threes in his steadfast, solid round. Nick Franks was only a point behind after an excellent front nine while David Binns took third from a cluster of four players on 71.

The midweek stableford proved an exciting contest between two of the club’s young scratch team players as Matt Watson and James Phillips both came in with an impressive 39 points.  On the tightest of countbacks Watson came first, as James Wilson picked up third on 37 points.

The ladies’ medal Division 1 was a showcase for Melissa McMahon as she cruised round the course at four under par scoring birdies at the three par fives to win with sublime ease Anne Humphrey had a spirited second nine to finish second on 74 and Hanna Jacobsen took third on 76.

Division 2 belonged to Rosemary Shepherd as she had a much improved back nine finishing with a nett eagle to win on nett 70, while Corinne Jones had two steady halves to finish second on 76, one ahead of Debbie Shinners. Shepherd also won the coveted Grannie Shield. The nine hole competition was close as Linda Baker just beat Jean Moss on countback, both on 15 points. Mary Golding was 3rd on 14.

THE seniors’ Briggs Trophy, a par-bogey competition is something different, and in the wet squally conditions at Lyme Regis Golf Club was not going to see some brilliant scores, but persistency would pay dividends. […]

Triumph of youth over experience in three ball scramble

SUNDAY’S three ball scramble at Lyme Regis Golf Club was a triumph of youth over experience as Scott Love, George Seed and Jon Ebdon stole the show winning comfortably with 58.7. […]

LYME Regis professional Kieron Fowler (pictured, left) was presented the award for being the leading Professional Golf Association Assistant in year two of the training in the South West. […]