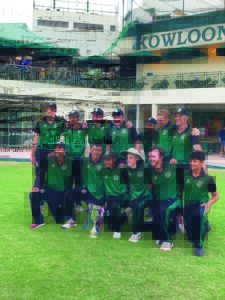 FORMER Uplyme and Lyme Regis cricketer Ashley Caddy, who lives and works in Hong Kong, is continuing his sporting exploits at the other end of the world.

Ashley (pictured back row third from the left) was a key member of Uplyme and Lyme Regis CC before moving to Hong Kong and he also played in goal for Lyme Regis Football Club for many seasons alongside his brother Adam.

Ashley is the nephew of Lee Caddy, the only person to captain both Lyme Regis Football Club and Lyme Regis Golf Club.

Devon league cricket to start on May 1st

WITH an end to the recreational sporting lockdown in sight, it looks hopeful that local cricket can start again on May 1. […]

Uplyme too strong for Crewkerne in 20-over friendly

UPLYME and Lyme Regis continued their impressive form with a six-wicket victory over Crewkerne in a 20-over friendly at the King George V playing field last evening (Wednesday). […]