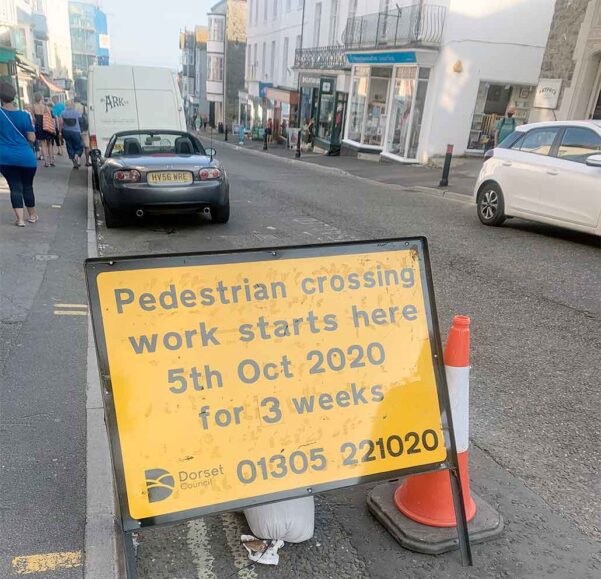 WORK to create a pedestrian crossing in Broad Street, Lyme Regis, will get underway next month.

The proposed pedestrian crossing split opinion in Lyme Regis and was eventually given final approval by Dorset Council in January 2019 after months of going back and forth.

Lyme Regis Town Council first requested a pedestrian crossing in 2016 when more than 600 residents signed a petition in favour of the idea. However, concerns were later raised about its proposed location between the Pug & Puffin and Joules stores, the potential for traffic congestion and the loss of four or five on-street parking spaces a crossing would cause.

Dorset County Council’s highways officer recommended refusal of the crossing, saying the loss of parking would adversely affect local businesses. But the county’s Regulatory Committee unexpectedly went against the recommendation, instead putting it forward for approval by Cabinet as they felt the benefits of the crossing outweighed the disadvantages.

In December 2018, Lyme Regis Town Council formally retracted its support for the crossing over parking and traffic congestion concerns, despite pleas from elderly and disabled residents who said it was needed to cross the road safely. However, Dorset Council still gave its final approval for the crossing the following month.

After retracting its support, a formal complaint was made against the town council by Lyme Regis resident Adrian Robinson, for indirect discrimination on the grounds of disability.

He said the council was guilty of not carrying out its duty of care and, in failing to carry out its duties correctly, was also guilty of maladministration.

Despite the town council having retracted its support, council members Cheryl Reynolds, Steve Miller and Richard Doney – who remained in favour of the crossing – attended the Dorset Cabinet meeting in support of the proposal, along with Lyme resident Lizzie Wiscombe, who is partially sighted and made the initial request for a crossing.

At the time she thanked all those who had supported the scheme, adding: “I never dreamt that we would have had such an uphill battle. All I wanted was for those who needed it, resident or local, a safe way to cross the road. Something some of you take very much for granted.”

Work will now get underway to create a puffin crossing between the Pug & Puffin and Joules stores in Broad Street on October 5 and is expected to take three weeks.

What is a puffin crossing?

The crossing in Broad Street will be a puffin crossing. This is a pedestrian crossing with traffic lights which go green again only when no more pedestrians are detected on the crossing by infrared detectors and mats.

The lights controlling pedestrians are also on the same side as the pedestrian, rather than on the opposite side as seen on a pelican crossing, as this encourages them to look in the direction of oncoming traffic.

Pelican crossings are no longer being installed in the UK.

FINANCES at Dorset Council are improving – although the authority could still be facing a budget gap of £4.77million at the end of the financial year. […]

Consultation over dogs on beaches extended

A PUBLIC consultation on regulations regarding dogs in public spaces has been extended until next month.  […]