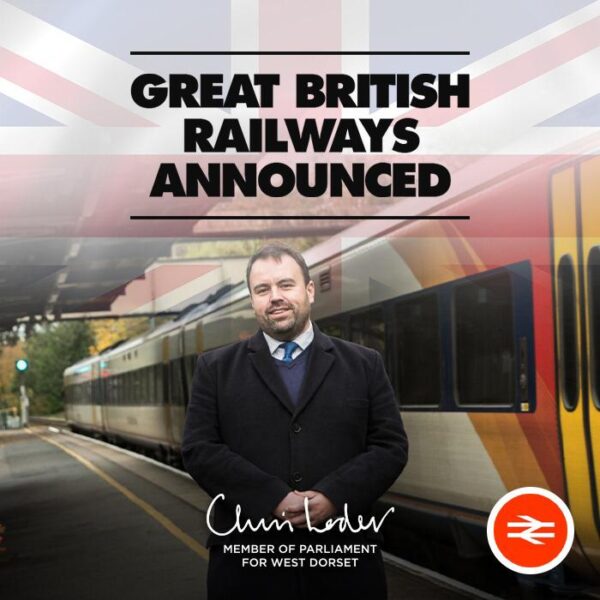 WEST Dorset MP Chris Loder has welcomed the plan to entirely reform and improve the railways across the country.

The body, which will replace Network Rail in 2023, will run and plan the rail network, own the infrastructure, and set fairs and receive the revenue in a bid to end a quarter of a century of fragmentation.

After a 20 year career on the railways, for which the Prime Minister described him as “one of the greatest experts in the House of Commons”, West Dorset’s MP Chris Loder has enthusiastically welcomed the Williams-Shapps Plan.

He has commended Mr Shapps for his ambitious plans and says he believes the plan will sort issues of through-fares and provide more regional connectivity where geographical franchising has previously failed.

Mr Loder added: “Passengers are what drive the railways, and they are the reason trains run.

“Passengers on the Heart of Wessex line have had to deal with low frequency services for too long, and this plan can change that.

“This Plan is another announcement from the government that will directly help Dorset.

‘This plan will create proper integration of the whole rail network under the single brand of Great British Railways, continuing the UK’s history as the birthplace of the railways, and it will become a recognised symbol of railways excellence around the world.”

Mr Loder said the government’s plans to make two and three-day a week season tickets a reality from June 21 was a “vital step in recognising that work and commuting habits have changed in light of the pandemic”.

Commuters form a big chunk of the rail industry’s customers, and he said that recognising their changing needs is clear evidence that the government intends to modernise the rail network along with the country as a whole.

He commented: “After 20 years working on the railways, it is an honour to be in this house for such wide-reaching reform.

“Passengers are at the heart of the industry and this Conservative government is laying the groundwork for the best rail system in the world.”

Mr Loder says he wants to make sure that the government uses this opportunity to the fullest, by making sure that underserved rural communities reap the benefits of this wide-ranging reform.

He wants to see rural towns and villages connected to urban centres, so that young families can access the best jobs without having to move away from home.

Chris will be working closely with the Secretary of State and Department for Transport in his role as a member of the Transport Select Committee to offer his expert insights on implementation and operational success.

MORE than a million overnight stays in West Dorset’s holiday parks and campsites have been saved, says West Dorset MP Chris Loder, who lobbied for government restrictions for the sector to be eased from July 4. […]

We will soon be able to pop down the pub, or will we?

TODAY I am not going to mention second-homers. Instead, let’s go down the pub! […]

THIS week in Westminster, our primary focus is on the UK Internal Market Bill, and I’d like to share my insights on this so far. […]