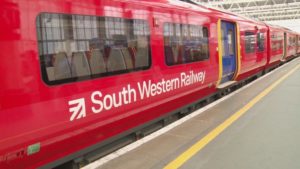 Mr Loder, who has 20 years experience working on the railways, is chairman of the newly-formed All Party Parliamentary Group (APPG) for the South Western Railway area, and welcomed the compensation announcement.

South Western Railways announced that the cost of rail travel for up to five days will be paid as compensation and will be offered to season ticket holders and daily ticket holders who were worst affected during the month-long strike over the Christmas period.

The news came just one week after a parliamentary meeting, chaired by Mr Loder, and attended by the Minister of State for Transport, South Western Railway managing director Mark Hopwood, and directors of Network Rail to discuss specific issues of performance, franchising and strikes.

Mr Loder said: “Parliament is working – and showing that when we hold organisations and government to account, we can achieve better and deliver for constituents.

CAUSLEY Cabs is run by husband and wife team Neville and Sarah Causley. Both have a background in hospitality, successfully running the Hunters Lodge Inn between Axminster and Lyme Regis for 14 years. […]

LETTER: Is a beach the right place for a protest?

WITH the weather this summer being exceptional we decided as a family to make the journey from our home in Northampton to your beautiful town of Lyme Regis. A long weekend away. […]

WEST Dorset MP Chris Loder has praised The Woodroffe School in Lyme Regis for going “above and beyond” during the pandemic, as he called for vaccinations for teachers to be given higher priority.  […]