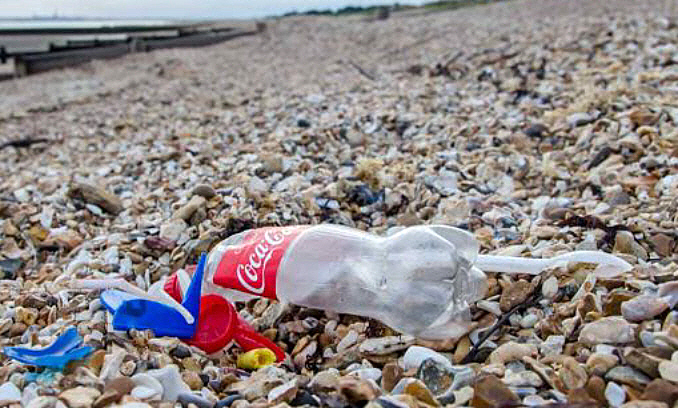 Mr Loder is one of nine cross-party MPs to support the Plastics Pollution Bill, which was introduced to parliament by Orkney and Shetland MP Alistair Carmichael, for the Liberal Democrats.

Despite intense public concern about the scourge of plastic pollution over the past three years, and a number of welcome initiatives by companies, Mr Carmichael argues that far tougher action is needed by the UK government to tackle the problem comprehensively.

He said in recent months the problem has grown with discarded single-use face masks, and the refusal of many stores to accept re-usable coffee cups adding to the the well documented explosion of plastic pollution blighting beaches, parks and natural spaces.

The Bill is supported by a cross-party group of MPs and a coalition of organisations including Friends of the Earth, Surfers Against Sewage, Keep Britain Tidy, Tearfund and the National Federation of Women’s Institutes.

Mr Carmichael said: “We need firm action on plastic pollution now, well beyond what we are already doing on climate change. Plastic pollution has not gone away with arrival of the pandemic and in some ways we have reversed progress – we have all seen the new scourge of disposable face masks around town.

“The pandemic may be with us for months more, but the damage done by plastic pollution and microplastics will be with us for decades, if not centuries.

“Every community – urban, rural, island – is affected by plastic pollution. Much of this plastic ends up in the sea, so we are as likely to find waste on the beaches in the Northern Isles as anywhere else. Still more concerning is the spread of microplastics – pollution that we cannot see.

“Where progress has been made already by government I have supported it but there is far too much still to be done. Plastic pollution cannot be treated like any other form of pollution – it demands a targeted response. The government must take this Bill seriously and consider the proposals for legally-binding targets.”

Friends of the Earth plastic pollution campaigner Camilla Zerr said: “Legally-binding targets are urgently needed to stem the tide of plastic that continues to pour into our environment.

“Actions taken so far by companies and governments fall far short of what’s required and are just drops in a plastic-polluted ocean.

“We’re delighted Alistair Carmichael is championing this crucial issue, and urge MPs from all parties to back the Plastic Pollution Bill.

“Ministers can still seize the initiative by incorporating the aims of this draft legislation into its flagship Environment Bill, currently passing through Parliament.”

“Our wildlife and natural environment are still under threat from the mountains of unnecessary plastic created every year.

“The government should listen to the continuing concerns about plastic pollution by incorporating this draft legislation into its flagship Environment Bill, which is currently passing through Parliament.”

Amy Slack, head of campaigns and policy at Surfers Against Sewage, said: “At this critical time for the environment the Plastic Pollution Bill set’s the gold standard for tackling the plastic pollution crisis.

“For too long plastics have polluted the ocean and our beaches and its time that we see progressive policies that reduce plastic pollution. By adopting the measures in this Bill, the government would demonstrate the commitment already made to introduce world leading environmental legislation that tackles the root causes of the plastic pollution crisis.”

A whirlwind introduction to the House of Commons

I’M really pleased to be writing my first ever monthly column for LymeOnline as your MP. […]

THIS week in Westminster, our primary focus is on the UK Internal Market Bill, and I’d like to share my insights on this so far. […]

Brownies do their bit to tackle plastic waste

UPLYME Brownies have been playing their part in cleaning up the environment and tackling plastic waste. […]