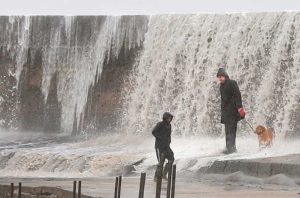 LYME Regis lifeboat crew has issued a stark warning after people were seen risking their lives on the Cobb during recent stormy weather.

The Cobb was battered by huge waves, high winds and heavy rain as Storm Dennis struck last weekend, but that didn’t put everyone off.

Local photographer Richard Austin took several shots of daredevils getting a soaking as they walked the Cobb wall in the stormy conditions, and videos captured by Lyme Regis resident Janette Edmonds showed several people, including children, getting hit by waves on the high wall.

Lyme Regis lifeboat operations manager Nick Marks has warned that walking along the Cobb’s high wall in such conditions could have “fatal results”, and the local lifeboat would not be able to launch in such weather.

He commented: “These videos and stills [pictured right and on front page] once again highlight the dangers of walking on the Cobb high wall in strong winds and heavy seas. It would be very easy for someone to be blown off the wall or swept into the sea with potentially fatal results.

“At this time of year sea water temperature is low such that survival times will be just a few minutes. The recent high winds and heavy seas are also well outside the safe operating limits of our inshore lifeboat so we would unable to launch.

“All weather boats capable of launching in these conditions are based along the coast at Weymouth and Exmouth but would take over an hour to come to the aid of anyone in the sea off Lyme Regis.”

Bridport and Lyme Regis harbourmaster James Radcliffe added: “The Cobb high wall can be dangerous in high winds and heavy seas, it can also be slippery when wet, and there are no handrails. Please obey the warning signs placed on the steps leading up to wall and keep off the wall in high winds.”

Last month, emergency services were called out to two people who fell from the high wall on the same day in far more clement weather conditions, due to a build up of algae making the surface particularly slippery.

One man fell off the wall into the shallow sea and was picked up by two paddleboarders, while a second casualty fell onto the lower wall and was taken to hospital with back injuries.

Watch video of storm-watchers getting a soaking on the Cobb, filmed by Janette Edmonds:

THE latest crime figures released by police show there were 25 crimes in the Lyme Regis area during December 2020.  […]