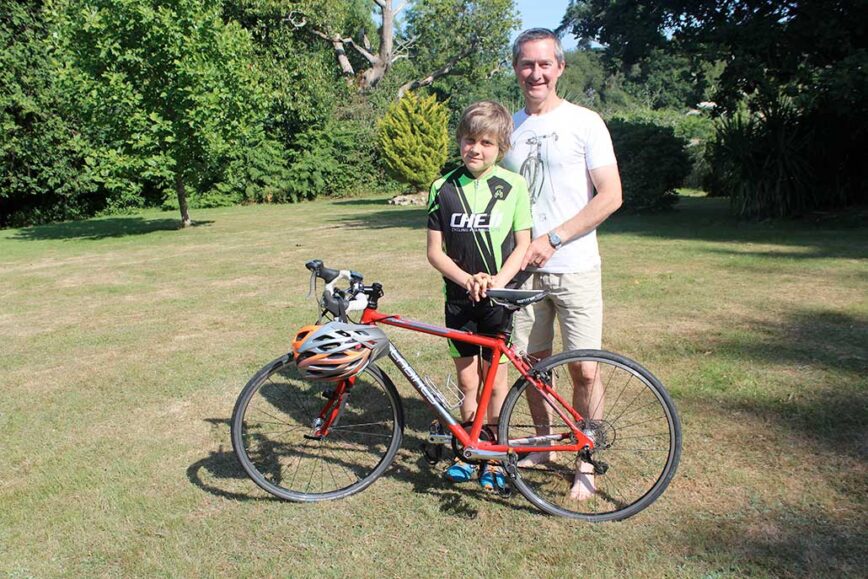 FATHER and son cycling team Justin and Orlando Migliari, from Uplyme, will be taking on a 450-mile challenge this August in aid of Devon Air Ambulance.

Justin, who works at Holyrood Academy in Chard, and 11-year-old Orlando, who attends Mrs Ethelston’s Primary School, will be cycling from Lyme Regis to Gretna Green in Scotland over five days next month. They will be wild camping along the route and will be carrying all of their own equipment.

Both father and son are experienced cyclists, with Orlando and younger brother Enzo having already joined their parents on several long-distance rides.

Orlando has completed rides around Paris twice, covered 180 miles in Germany and joined dad Justin on a charity cycle from Lyme Regis to Minehead last December. He also regularly cycles to school but it is his passion for gymnastics, as a keen member of Honiton Gymnastics Club, that really keeps his fitness levels up.

The pair decided to raise funds for Devon Air Ambulance after watching the helicopter attend a recent emergency in the village, when they were able to chat to some of the crew. They are hoping to raise £500.

Justin said friends and colleagues have already been very generous, and Mrs Ethelston’s held a collection to boost their funds at its recent school play. Colyford Cycles and Seaton Cyclelife are also supporting the team, offering full checks, servicing and advice on their bikes.

MAJOR road surface dressing works will take place on the residential estates of Lyme Regis over June and July.
[…]