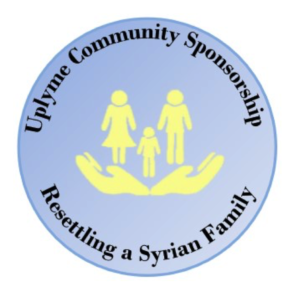 UPLYME Community Sponsorship Scheme was delighted to receive a grant of £750 from Lyme Regis Town Council.

The scheme, which aims to resettle a Syrian refugee family in the local area, was one of 25 local organisations to benefit from the council’s annual minor and medium grants handout, totalling more than £42,000.

Volunteers recently held a successful Syrian Supper, which raised a further £1,300 and provided a memorable evening of colours, tastes, textures and a testing quiz about Syria in a spirit of camaraderie and community friendship.

The next fundraiser will be a one-woman play, written and performed by former West Dorset resident, Catherine Dyson, at the Marine Theatre in Lyme Regis.

The show, called ‘Transporter’, will explore the issues of identity, difference and migration from the perspective of a 13 year-old girl. It will be held on Wednesday, April 24 and tickets are now available from the Tourist Information Centre on 01297 442138 or from www.marinetheatre.com.

Catherine wrote the play following a development project by Theatre Iolo in Wales to encourage people to make work for younger people. As writer-in-residence based at the Riverfront in Newport, Wales, she discussed her themes of ‘identity’ and ‘belonging’ with groups of young people from 11 years old and upwards.

In 2017, the Manchester Arena bombing, the Grenfell Tower disaster and the unprecedented rise in homelessness were very much on the minds of the young people with whom she was exploring her ideas. Catherine was profoundly influenced by their awareness of and sensitivity to national and global events and how connected they felt as global citizens to people in different and difficult situations worldwide.

Catherine’s own family heritage also makes her aware of forced migration and movement as her Polish Jewish grandfather had moved to the UK via Australia during the second world war and she herself experienced several different homes around the UK as a child, so feels connected to families who have to move.

‘Transporter’ explores the idea of a never-ending journey through the experience of an eternal 13-year-old girl who moves to a new city with her mother. Magic realism is used to weave individual stories about growing up, moving home and experiences in classrooms to reflect mother-daughter relationships and what it means to be in situations beyond your control, as many migrants and refugees find themselves today.

Catherine has performed her play in London and Kolkata, India, and will be touring Wales with Theatr Iolo and The Riverfront. The play was directed by Andy Smith and sound designer Lewis Gibson has composed a bespoke soundtrack.

Many theatres are staging matinees for school groups as the production is aimed at engaging audiences from 11 years old, as well as evening performances for the general public.

Uplyme Community Sponsorship Scheme has set ambitious fundraising targets and other exciting community events are planned, ranging from activities at fairs and festivals to an Auction of Promises, a community supper, a butchery masterclass, clothes sale, a choral performance and a jazz concert in Uplyme Parish Church on Saturday, June 1.

Local schools, churches and community groups are getting involved and groups of volunteers are researching the health, education, housing, benefits, language, religious and cultural provision in both Devon and Dorset to construct a resettlement plan which will be considered by local authority and then the Home Office.

Supporters and volunteers are very welcome to join. Organisers are particularly keen to hear from property owners and landlords who would be willing to rent their house to a resettled Syrian family.

Further information is available at www.gov.uk/government/publications/apply-for-full-community-sponsorship or email UCS at uplymecommunitysponsorship@gmail.com

THE sister of a man who was lost with two friends in a tragedy that resulted in the longest-ever call out for Lyme Regis lifeboat crew has marked the anniversary of the incident with a special donation. […]

LYME Regis-based international reforestation charity, The Word Forest Organisation, has been working throughout lockdown, raising awareness of the planetary value of trees and raising funds to reforest Kenya.  […]

THE Mary Anning Beach Hut in Lyme Regis – available solely for those affected by cancer and their families – has been named Beach Hut of the Year. […]