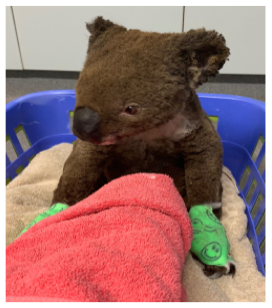 BACK in March, the 1st Lym Valley Cubs raised more than £100 to help adopt a koala in the wake of the wildfires that engulfed Australia last year.

Since then, the Cubs have adopted two koalas, named Anwen and Paul, who were among the first koalas to be rescued at a nature reserve in Australia.

The money the Cubs raised will go towards helping the koalas recover in the hope that they can be returned to their natural habitat; ensure they can be treated for injuries as much as is possible; and future conservation work carried out by the koala hospital.

“I remain proud of the Cubs for their efforts in raising money for a worthy cause – especially given as we’ve not only helped to support one koala, but two koalas using the money raised.”

In the most recent update the Cubs received about how the koalas are recovering, they were told that both have had their bandages removed, they’re going outside and hanging around on the trees and are eating well.

The Cubs look forward to hearing about what happens next to the pair.

LETTER: Why single out the seagull?

FIRSTLY, I would like to congratulate LymeOnline for being the brightest, most cheerful local paper that I have ever come across (I am, in fact, 86 years of age, so that is a lot of local papers!). […]

UNLESS a new leader can be found before the end of July, the Beaver Colony at the 1st Charmouth Scout Group will close. […]

Birds of prey will not be used to scare off seagulls

LYME Regis Town Council will not be employing the service of eagles to frighten away seagulls – but it took the casting vote of new mayor Brian Larcombe to reject the idea. […]