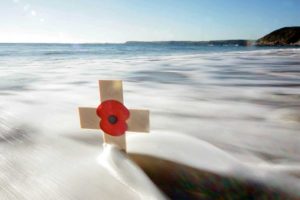 LYME Regis will celebrate the 75th anniversary of Victory in Europe Day with a weekend of events in May.

The events are being organised by Lyme Regis Town Council’s operations manager Matt Adamson-Drage and town crier Alan Vian, along with a small committee.

The celebrations will get under way on Friday, May 8 with a ceremony around the Cobb Gate anchor.

A civic party, led by the mayor, Councillor Brian Larcombe MBE, will process from the Guildhall to the anchor where Lyme Regis Town Band will be playing.

At 2.55pm a bugler will sound ‘The Last Post’ and a piper will play ‘The Battle’s O’er’. The mayor will then make a speech reflecting on the role that Lyme Regis played in the ending of the war.

Negotiations are taking place with Lyme’s seafaring organisations for a flotilla that afternoon.

In the evening (6.45pm) the mayor and mayoress will light a beacon on the North Wall followed by a ‘Cry for Peace’ by Mr Vian.

On Saturday, May 9 Lyme residents aged 75 and over are being invited to a free tea with entertainment at the Baptist Church Hall, organised by the Woodmead Halls Management Committee, and on Sunday, May 9 a civic service will be held at St Michael’s Parish Church, led by the Archdeacon of Sherborne, the Venerable Penny Sayer.

Also on Sunday, the mayor will be invited to open the annual May Fete in the Anning Road playing field, assisted by deputy mayor Councillor Stan Williams, who will make a speech recalling VE Day in Lyme.

A tree planting ceremony is also being planned.

Full details of the events will be announced nearer the time.

‘For the Socour of Shippes’ – Part I

TO mark its centenary year, Lyme Regis Museum has launched its own animated film, ‘Thomas Coram: Lyme Legend’, celebrating the life of the town’s “kindest citizen” and founder of England’s first charity, The Foundlings Hospital. […]

PROMPTED by Phillip Evans, this is the first of a series recording the growth of the town as its economy became totally dependent on tourism. […]