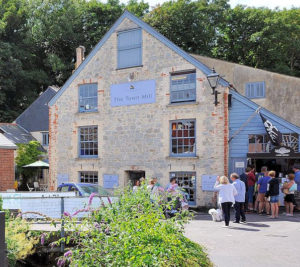 FLOUR made at the historic Town Mill in Lyme Regis has received a prestigious Great Taste award.

Great Taste are the world’s most coveted food awards, celebrating the very best in food and drink, and the Town Mill’s stoneground wholemeal spelt flour has received a two-star award, meaning judges dubbed it beyond delicious.

Judged by more than 500 of the most demanding palates, belonging to food critics, chefs, cooks, restaurateurs and producers, as well as a whole host of food writers and journalists, Great Taste is widely acknowledged as the most respected food accreditation scheme for artisan and speciality food producers.

As well as a badge of honour, the unmistakeable black and gold Great Taste label is a signpost to a wonderful tasting product, which has been discovered through hours and hours of blind-tasting by hundreds of judges.

Gary Willis, chairman of the Town Mill Trust, said: “We are thrilled to have been awarded two stars by Great Taste. We only officially registered as a food producer this year, after a period of offering our flour by donation.

“We knew the artisan flour made in our restored watermill was something special – our visitors have been telling us so for years!”

To celebrate the award, the Town Mill will be holding a tasting event tonight (August 8) where visitors will be able to sample a range of baked goods made with the award-winning spelt.

About Francesca Evans 2554 Articles
Francesca grew up in Lyme Regis and has worked in community journalism in the area since 2011, having gained a First Class Honours degree in journalism and her NCTJ qualifications at Southampton Solent University.
Instagram Twitter

ANYONE that knows the Evans family knows there’s nothing we love more than getting together for a great meal out. […]