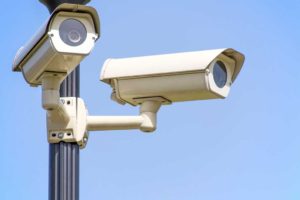 LYME Regis councillors will reconsider whether they want to join the new Dorset Council’s CCTV project, after finding out there would be an initial cost of £7,500.

Councillors previously voted in favour of joining the scheme, allowing Dorset Police to monitor footage from existing cameras in the town, when they thought there was no cost involved.

However, at last week’s full council meeting, operations manager Matt Adamson-Drage reported that a fibre link between Lyme and the Dorchester CCTV control room would be required, costing £7,500, plus an annual line rental of £1,200.

Councillor Richard Doney spoke strongly against CCTV during the initial discussion on the scheme, saying it was just another way for authorities to keep surveillance on the public.

He continued his arguments at last week’s meeting, commenting: “As you know I am not at all in favour of this idea. The news now that we’ve been told we’re going to have to pay for it makes it even worse value for money in my opinion and I certainly can’t support it.”

However, Councillor Jeff Scowen said he thought the council should still join the scheme as “the safety of residents and visitors is paramount”.

“The cost we can afford and we should not use it as an excuse not to have this scheme,” he added.

Councillor Brian Larcombe reiterated his previous comments that a recent report from a CCTV consultant had concluded that Lyme Regis did not require any more CCTV coverage, because the level of crime in the town did not warrant it.

Councillor Scowen argued: “I believe that crime has increased since I’ve lived in Lyme Regis and I feel like that’s a trend. It would be better if we had this system in place because we’re just going to close the stable door after the horse has bolted if we’re not careful.”

It was agreed that the matter would be considered again, taking into account the costs, at the next Town Management Committee meeting.

Gardens gatepost not up to scratch

TOWN councillors have expressed disappointment in the reconstruction of a gatepost at Langmoor Gardens in Lyme Regis, describing it as “outrageous” and “shocking”. […]

AS national leaders meet in Glasgow for the COP26 conference, councillors from Lyme Regis, Charmouth and Seaton have been offered Carbon Literacy training to help improve their understanding of the climate and ecological emergency.  […]

THE town council has reported that the coronavirus pandemic cost the town a total of £310,000. […]