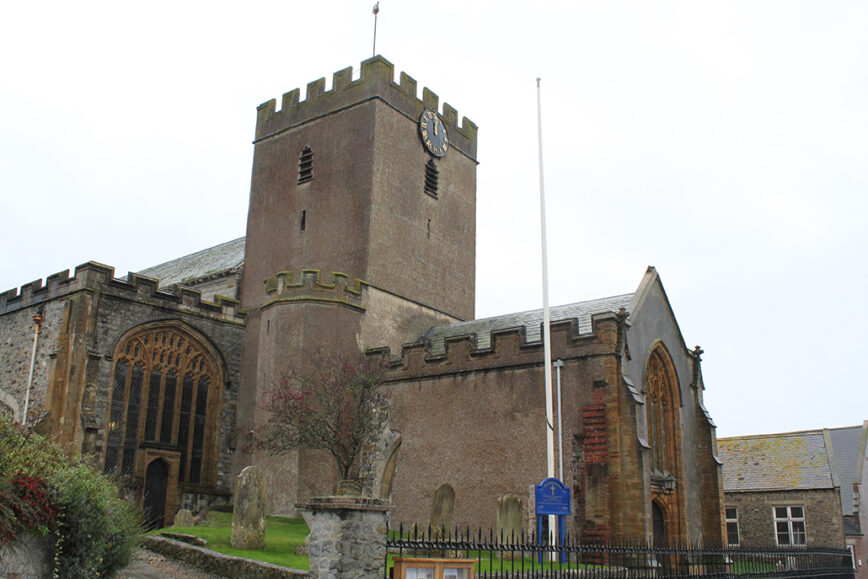 LYME Regis Town Council has agreed to increase its grant to the parish church’s tower appeal from £25,000 to £40,000.

The bell and clock tower at St Michael’s Parish Church is currently suffering from water ingress, causing damage inside the historic building, and a full refurbishment is expected to cost about £150,000.

Damage has become noticeable from the inside of the church, with plaster falling from the walls of the baptistry, resulting in the main entrance being closed to the public.

The church has raised £80,000 through special events, donations, grants and from its reserves, but it requires 80% of the total cost before work can begin.

A grant request from the church was recently considered by the town council’s Strategy & Finance Committee, when it was agreed to donate £25,000 towards the project, but when the recommendation was put forward for final approval from full council last night (Wednesday), members agreed to up the grant to £40,000.

The decision to increase the grant came after Tim Bacon, from St Michael’s Parochial Church Council, emphasised the urgency of the repair work during the public forum.

Mr Bacon said the church – the only grade I listed building in the town, with the Cobb being classed as a structure – had been “central to the life of Lyme Regis for nearly 1,000 years”.

He explained that the church’s architect inspected the building every five years and had recommended urgent repairs to the tower rendering to stop water ingress.

Mr Bacon commented: “The tower is the oldest part of the church; Saxon at the base with Norman additions. Ingress of water has damaged stonework and internal timbers, and recent falls of plastering in the baptistry are further evidence of ongoing deterioration.

“A capital repair project such as this is quite beyond our resources without financial support from other sources. All permissions and approvals have been obtained, and the total project cost is estimated at £150,000. Funds raised so far, including grants, total £80,000, including a recent donation of £4,000.

“We were delighted and grateful that the Strategy & Finance Committee recommended that a grant of £25,000 be made. This support from the town would bring the total raised to date to £105,000.

“However, we would still not be able to proceed with the work because the diocese requires us to have raised 80% of the money needed before work may commence. We are still £15,000 short of this figure.

“We understand that our contractor could start work in September. The removal of the old render can be done at any time of the year, but applying new lime water render can only be done when there is no risk of frost. If the work is to be done this year, September is the latest we can start.”

Mr Bacon requested that the council consider an increased grant of £40,000 which would allow the repair works to begin by September, and would give the church time to raise the remaining £30,000 of the total cost.

He added: “If the council is able to make a grant of £40,000, by Christmas the tower will again be protected from the elements and, all being well, the church clock will be telling the right time and chiming the quarters and hours once again.”

During the initial discussion at the Strategy & Finance Committee meeting, Councillor Michaela Ellis had proposed granting the church £50,000, rather than £25,000, but her suggestion was not supported at that time.

Speaking at this week’s meeting, she commented: “We have heard tonight how critical it is to have this money and I said before that £25,000 would not be enough to get them going. I think we really need to think hard about giving them the rest of the money they need.”

Councillor Jeff Scowen said he would second the proposal, “in light of the comments made tonight and the seriousness of the situation”.

The Mayor of Lyme Regis, Councillor Brian Larcombe MBE, said: “I don’t believe this is simply a matter of the church, this is about what the building represents; it’s an historic building of great significance to the town.

“The question we need to ask is, does this extra £15,000 push us to a position that we accept or decline? If we decline, we would be the council that, at a time of need, didn’t support a building of such significance and stature in the town.”

Councillor Scowen added: “It’s clear that it’s in a serious condition and urgent repair is needed. I would hate it to be on our watch that there’s a deterioration that’s really unacceptable, dangerous, and the church ultimately closes or even the tower collapses.

“It’s not about church, it’s the structure of this magnificent building that we need to preserve.”

Can councils donate to churches?

At both meetings, town clerk John Wright has told councillors it would be a risk for them to donate money to the church, as the Local Government Act of 1894 states that local councils’ powers, duties and liabilities do not include the affairs and property of the Church of England and those held for an ecclesiastical charity.

It was unclear whether the prohibition still applied or whether it was overridden by legislation made since the 1894 act. Advice of the National Association of Local Councils was to act “prudently” on the matter, and the council’s solicitor advised members to act “cautiously”.

However, members of the council unanimously agreed to increase the grant for St Michael’s Parish Church to £40,000.

The decision has been met with a largely negative reaction on local social media pages, with several arguing that the Church of England should pay for the repairs.

At a previous meeting, Councillor Ellis explained that the church belonged to the congregation and it was up to them to raise the funds and look after the building, with only a set amount of money being received from the Church of England each year.

Others have argued that the money could be better spent elsewhere in the town, including to help the pre-school which closed down this week due to lack of funding.

The additional £15,000 for the church is not related to the £15,000 donation to the town from makers of Mary Anning film ‘Ammonite’, as some have suggested. This funding is still available and local organisations and charities are being invited to apply for it.

POOR and sometimes offensive behaviour from a handful of town and parish councillors across Dorset may be putting people off seeking public office or resigning as councillors. […]