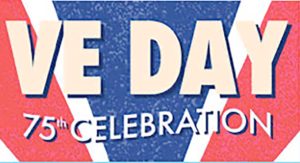 RESIDENTS of Lyme Regis, Uplyme and Charmouth are being encouraged to throw a ‘stay at home garden party’ to mark the 75th anniversary of VE Day on Friday, May 8.

A whole weekend of events to commemorate the anniversary was scheduled to take place in Lyme Regis, but has had to be postponed until September due to the coronavirus outbreak.

But the Lyme Regis branch of the Royal British Legion is still encouraging residents to mark the special day in their own homes, commemorating 75 years since Nazi Germany’s unconditional surrender at the end of the Second World War.

Residents are being encouraged to decorate their gardens in red, white and blue and enjoy a picnic between 2pm and 4pm.

Those taking part are asked to observe a two-minute’s silence at 3pm, and then take part in a mass singing of the National Anthem from their gardens.

Wartime songs will be played during the afternoon from various sound systems around the town.

To adhere to government guidelines, those taking part should only host a garden party with members of their own household and respect social distancing with neighbours.

The chairman of the Lyme Regis branch of the Royal British Legion, Ian Marshall, will be laying a wreath at the town war memorial on his own to mark VE Day.

LymeOnline plans to give full coverage to the VE Day celebrations, so please send photos and videos of your stay at home garden party to edit@lyme-online.co.uk

A LOCAL businessman has said the town council office is “letting the people of Lyme Regis down” after failing to address health and safety concerns he first raised last year. […]

BEFORE continuing the perambulation of the town, it is necessary to consider that the population in 1588 (Armada year) was 1,121 living in some 170 households, in addition there were 247 mariners in 23 ships. Today the population is 3,671. […]