FUNDRAISERS are being planned in memory of popular former Lyme Regis student and local footballer Adam Bounds, as it approaches the first anniversary of his sudden death.

The Lyme Regis and Axminster communities were left shocked when Adam died last May, aged 41, following a brain haemorrhage.

An inquest in December put his death down to a severe and rare reaction to the AstraZeneca COVID-19 vaccine.

Adam had attended The Woodroffe School in Lyme Regis and played football for Axminster and Uplyme. Although he had moved to Bristol later in life, he remained a particularly popular character in the local area, often known as the “life and soul of the party”.

As it approaches the first anniversary of Adam’s death, friends are planning to remember him by raising funds for his favourite charity, the RNLI.

Matthew said: “Unfortunately in May 2021 my best friend Adam Bounds passed away suddenly.

“Adam loved life and was loved by so many people. We spent much of our childhood hanging out in Lyme Regis, especially at Lifeboat Week, where he made many friends and so many great memories.

“Another favourite place of ours was Newquay; a place where we used to head down to Run To The Sun weekend. A weekend of drinking, dancing, and climbing up lamp posts!

“There will be lots of blood, sweat and definitely tears, but definitely worth it. In memory of Adam I have decided to raise money for the RNLI lifeboat station in Lyme Regis.”

The group were hoping to raise £1,000 for the RNLI but have already surpassed this total. You can sponsor them at  www.justgiving.com/crowdfunding/matthew-payne-1 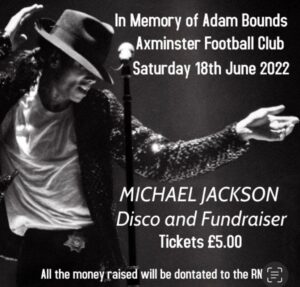 A disco is also being planned to raise celebrate Adam’s life and raise further funds for the RNLI.

The event will be held at Axminster Football Club in Saturday, June 18, starting at 7pm, and will include a number of Michael Jackson songs – Adam’s favourite artist – as well as other disco numbers.

Tickets for £5 are now available to book at www.ticketsource.co.uk/Michaeljackson

More than £1,700 has already been raised for the RNLI in memory of Adam, through donations made at his funeral and a charity football match during last year’s Lifeboat Week.

LYME Regis lifeboat launched on Saturday, August 25 to a report of a missing swimmer near Burton Bradstock. […]

VOLUNTEERS from Lyme Regis lifeboat station and their families are the stars of the very first Christmas film produced by the RNLI.  […]

LYME Regis resident Seb Cope is in training for a gruelling 55-mile charity cycle ride on his penny farthing.  […]