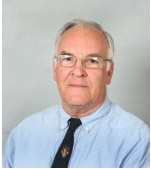 AXMINSTER community champion John Jeffery has been awarded the British Empire Medal (BEM) in the New Year’s Honours List – and no one deserves it more.

Mr Jeffery, an Honorary East Devon Alderman and former Mayor of Axminster, has been awarded the honour for his exemplary services to the community of his home town.

He is dedicating the honour to his late parents, H.R. (“Lord Jeff) Jeffery and his wife Mary, who both worked tirelessly for the community of Axminster.

As a young reporter I was the recipient of many kindnesses from “Lord Jeff”, who was a founder of Axminster Chamber of Commerce and instrumental in acquiring the Guildhall for Axminster, serving many years as a high-profile parish councillor.

John Jeffery followed the example set by his parents from the age of 15 when he started volunteering at the Royal Devon & Exeter Hospital, which continues to this day.

Since then there have been few areas of community life in Axminster that have not benefited from John Jeffery’s example, support, commitment and enthusiasm. He has dedicated his adult life to the St John Ambulance Brigade, Axminster Chamber of Commerce and Axminster Carnival among many others, as well as his service as a much respected town and district councillor, culminating in his appointment as an Honorary Alderman.

Aa a councillor he built a reputation as a do-er rather than just a talker, plain speaking and always putting his constituents first. He will not be offended by being described as “old school” and was one of those councillors, rare these days, always prepared to roll up his sleeves and getting his hands dirty when necessary. It might be delivering sandbags when there was flooding, clearing the snow from the pavements or swinging from The Fountain in Trinity Square whilst putting up the Christmas lights.

A few years ago I organised the “Pride In Axminster” awards in which John Jeffery received the Community Champion honour, voted on by the readers of the now defunct View from Axminster newspaper. He won it by a country mile and when the result was announced he received a standing ovation.

John accepted that honour with great humility as he will the BEM. It won’t change him. He will still be JJ. And he will still be putting Axminster and its people first.