THE bronze statue of one of the most influential women in the history of science, Mary Anning, has arrived in her hometown of Lyme Regis ahead of an official on Saturday, May 21 – exactly 223 years after the fossil hunter’s birth.

The campaign for the statue was first initiated by Dorset schoolgirl Evie Swire, then aged just 10 years old, who set about launching the Mary Anning Rocks fundraising campaign with her mother, Anya Pearson.

With the backing of high-profile supporters such as broadcaster and natural historian, Sir David Attenborough, and author Tracey Chevalier, who wrote ‘Remarkable Creatures’ based on Mary Annings’ life, the campaign successfully raised more than £100,000.

Originally created in clay by artist Denise Dutton and then cast in bronze, the statue will be sited on Lyme Regis seafront, on the corner of Long Entry and Gun Cliff Walk, overlooking the beach where Anning made some of her greatest discoveries.

Build up to the unveiling will start at 2.50pm on Saturday, May 21. The event will start with a ‘Song for Mary’ by local shanty singing group, the Lyme Bay Moonrakers.

Inspired by Mary, group member Corinne Read has written the lyrics for this new song, with music composed by the group’s musical director, Mark Hewitt.

Corinne said: “We all have a story to tell but women have so often struggled to be heard, Mary Anning was one such woman.

“During my career in the counselling world I have helped many women to find their voice. It has, therefore, been a pleasure to not only tell Mary’s story but, with Mark’s inspiring music, to celebrate her life in song.”

Other musical acts will perform at the unveiling, including folk singer and musician, Iona Lane, and the award-winning contemporary music-theatre group, Electric Voice Theatre.

The group recently hosted a song-writing competition with local schoolchildren invited to submit their owns songs about Mary Anning, with the winning entries set to be performed at the unveiling.

The event will also include a short performance by British actor and writer, Lizzie Hopley, who will be playing Mary Anning herself.

Biological anthropologist, television presenter and author, Alice Roberts, will give a closing speech as she unveils Mary’s statue alongside Evie and the winners of a local design competition.

Ahead of the construction of the life-size statue, a maquette of Mary Anning was created and is now being taken on a tour of UK museums this year.

From the Museum of Natural History in Oxford, the Sedgwick Museum of Earth Science in Cambridge, and the Lapworth Museum of Geology in Birmingham, to the National Museum in Cardiff, and the Girls into Geoscience (GIG) at the University of Plymouth, the maquette is expected to create lots of interest as it travels around the country.

Lyme Regis Museum, located on the site of Mary Anning’s former home, will also be marking the 223rd anniversary of the palaeontologist’s birth with the opening of a new exhibition, ‘Mary Anning Comes Home’, on the same weekend, featuring recent acquisitions and showcasing B.J.M. Donne’s portrait of Mary Anning on loan from the Geological Society. 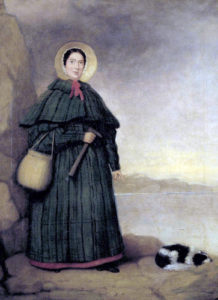 It is famously said that Mary was struck by lightning as a baby and was the inspiration for the tongue-twister ‘She Sells Sea Shells on the Sea Shore’.

More recently, she was depicted by Oscar-winning actress Kate Winslet in the movie ‘Ammonite’, filmed partially in Lyme Regis and Charmouth in March 2019.

I’M very good at keeping a secret which is often an essential part of working at the Marine Theatre, the old adage: you never quite know what goes on behind closed doors, especially theatre ones, springs to mind. […]

THE Mary Anning Rocks appeal has reached the £70,000 mark, meaning work can start on the much-awaited statue of Lyme Regis’ most famous fossil hunter.  […]