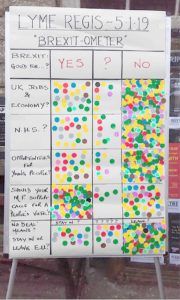 RESIDENTS and visitors to Lyme Regis were intrigued by a street stall and ‘Brexitometer’ set up in Broad Street on Saturday by People’s Vote campaigners.

The campaigners – who support a second referendum on the Brexit deal – asked members of the public to express their views of the process of leaving the European Union.

More than 120 people answered questions by means of coloured dots, with a clear majority feeling Brexit would be bad for the UK’s jobs and economy, for the NHS and for opportunities for young people.

Opinion was more divided about whether MPs should support calls for a People’s Vote, though a majority of those asked said they should.

It became apparent that there is still confusion about what a ‘No Deal Brexit’ actually means, with some people saying they thought this meant the UK would stay in the EU.

MATT Chorley has spent the past 17 years in Westminster seeing up close how politics works, or doesn’t. […]

WEST Dorset MP Chris Loder said he is “deeply embarrassed” by revelations of Downing Street parties being held during the coronavirus pandemic, and says he wants to restore “decency, honour and trust” in the government. […]

THE three main political parties have announced their parliamentary candidates for the upcoming by-election in the Tiverton & Honiton constituency, which also includes Uplyme, Axminster and Seaton.  […]