CAMPAIGNERS have sent a clear message to water companies, that sewage overflows in our rivers and seas should no longer be tolerated.

Dozens of regular sea swimmers gathered on Lyme Regis beach last Saturday to literally spell out their message in the sand – ‘No More Poo’.

They are campaigning against water companies being permitted to allow sewage overflows in rivers and seas in stormy weather, and are calling for all-year-round water quality monitoring in Lyme Regis.

This is currently only carried out by the Environment Agency during what is considered the main bathing season in the summer, but Lyme Bay is becoming increasingly popular with water sports enthusiasts throughout the year, including many swimming groups such as the Lyme Regis Blue Tits.

Group member Beverley Glock said: “We swim everyday, at least once a day, sometimes four or five times a day all year round, and we have to combat raw sewage that is going into our sea.

“The monitoring station is turned off at the beginning of September, as I assume the Environment Agency thinks nobody swims after then, and in any bad weather all the overflow from the sewage from the restaurant and bars all along the seafront go straight into the sea.

“The sewers haven’t been ungraded since Victorian times and no investment has been put into the infrastructure since 1989 and it’s just ridiculous.

“The water companies are making money and they need to invest in the water quality that we are swimming in. We do not want to swim in poo; we are fed up of swimming in poo.”

In its Storm Overflows Event and Duration Monitoring 2020 document, South West Water said: “Storm overflows are legal discharges from the wastewater collection network that occur in very wet weather to prevent flooding of homes and businesses.

“Over the last 20 years, investment by water companies has dealt with most of those storm discharges where the Environment Agency had identified environmental problems. But we recognise there is more to do, which is why the sector is planning to invest £51 billion over the next four years to further address storm discharges.

“In 2013, Defra set a requirement on water companies to be able to monitor the performance of the ‘vast majority’ of storm overflows by 2020. To achieve this, we fitted large numbers of event and duration monitors to our storm discharges.

“We use this data to make sure our network is still operating correctly and capable of meeting the new, more extreme weather we see from climate change.

“Over the years we have worked with the Environment Agency to identify any discharges that weren’t providing enough protection for rivers and coastal waters.

“This has led to considerable investments in additional wastewater treatment and stormwater storage capacity, and has played a part in delivering vastly improved environmental water quality in the South West.

“We, like all water companies, are committed to protecting rivers from pollution. This has included extensive upgrades to Wastewater Treatment Works and removing the raw sewage discharges that used to go into the sea around the South West coast.

“At privatisation we inherited a system where wastewater from around 40 per cent of the population discharged into the sea untreated.

“For storm overflows we have improved over 298 stormwater overflows to bathing waters and 382 to shellfish waters since 1989, by adding more than 222,100 cubic metres of additional stormwater storage built at a cost of over £100million.”

Investment since 1989 ‘a pittance’

But campaigners have argued that the investment since privatisation in 1989 is actually a “pittance” compared to the amount water companies are making, pointing out that in 2020 South West Water made nearly £140million in profit, after-tax, and distributed nearly £250million in dividends. 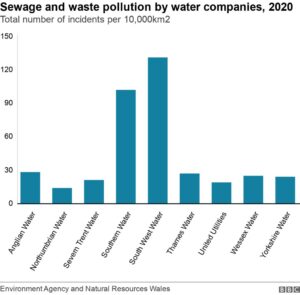 In October 2020, Surfers Against Sewage reported: “Today, the Environment Agency reported that the performance of water and sewage companies continues to decline for a second year in a row.

“We continue to see water companies putting the profits of their shareholders above their duty to protect precious river and ocean habitats so vital for our health, wellbeing, and the restoration of nature.

“Four out of the nine water companies in England now rate as poor, the worst results since 2011 – South West Water, Southern Water, Anglian Water and Northumbrian Water received a rating of just two stars with the number of serious pollution incidences plateauing rather than reducing.

“The total number of pollution incidences was the highest since 2014 with Southern Water more than doubling the reported number of incidences in 2019 compared to 2018. Only Wessex Water and Seven Trent Water achieved the highest level of performance.

“The report comes just days after it was released that only 16 per cent of rivers currently meet Good Ecological Status with no rivers passing chemical tests, suggesting continued issues with the discharge of sewage into water ways.

“The UK ranks just 25th out of 30 European counties for the state of its coastal bathing waters. Results released today provide little evidence that the health of rivers and coastal waters are improving at all.”

‘A myriad of failures’

The House of Commons Environmental Audit Committee released the Water Quality in Rivers report last week, and The Rivers Trust has said that the government “can no longer ignore the routine pollution of our rivers to suit commercial interests”, as the report highlights “a myriad of failures across the public and private sectors, and the fact that river pollution has become dangerously institutionalised”.

The report found that the processes used to monitor river pollution are outdated and inadequate; relying on water companies to monitor their own pollution incidents is fundamentally flawed; and the current state of our rivers is the result of decades of underinvestment into sewage works. It called for rapid action from the government to fight back against pollution.

In Lyme Regis, the community are taking matters into their own hands with volunteers from Turn Lyme Green starting  regular monitoring of water quality in the River Lim, following the erection of signage along the river last summer warning of potential pollution risks.

With thanks to Max Redwood for the drone images and video

LETTER: Well done to all involved in ‘Sea What’s There’ event

CAN I just say how impressed I was with the very interesting and informative evening at the Marine Theatre ‘Sea What’s There’, comprising four excellent speakers presenting to a packed house on different aspects of plastics pollution in our rivers and seas, together with the ongoing stakeholder inclusive management of the Lyme Bay Marine Protection Area. […]

IT astonishes and massively offends me how many of my generation are currently driving around Lyme or visiting Lyme in their huge vehicles. […]

THERE aren’t many charging points in Lyme Regis, so to make it easier for electric vehicle (EV) drivers in or visiting Lyme Regis, Turn Lyme Green member and town councillor Rob Smith made his home charging point available to drivers and he’s learnt and gained a lot from his generosity. […]