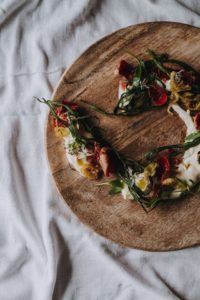 PLANS for a new restaurant in Silver Street, Lyme Regis, have been given the go ahead.

Dorset Council has approved planning permission to change the use of 63a Silver Street, formerly the Whoopsadaisy ceramics shop and workshop, into a restaurant.

The application was submitted by chef Harriet Mansell of the Robin Wylde restaurant, which has previously built a successful reputation serving diners at the shared space known as The Pop Up Kitchen, in Broad Street.

Robin Wylde offers high-quality, seasonal food showcasing the best in local produce, with Harriet foraging for many of the ingredients herself.

After opening at The Pop Up Kitchen last summer, the restaurant was described as “Lyme’s best kept secret” and it will now be opening its own venue just a few yards away.

Harriet has built up such a good reputation that she was selected to compete in the BBC’s ‘Great British Menu’ two years running.

Speaking of the Silver Street property, Harriet commented: “The space was exactly what I had been looking for. I would love to be a permanent part of the Lyme Regis community and believe this is the perfect environment to continue and build on the success I have had with Robin Wylde.”

Harriet added that she plans to launch a crowdfunding campaign to raise capital for her new venture.

The planning application received 23 comments from members of the public – all in support of the restaurant – describing Robin Wylde as a “cut above” the rest and saying the new restaurant would be of great benefit to Lyme Regis.

The full planning application can be viewed at https://bit.ly/2PCTnV9. For more details on Robin Wylde, visit the website www.robinwylde.com

Try something new at The Pop Up Kitchen

FOOD fans in Lyme Regis are being encouraged to ‘try something new’ at the Pop-Up Kitchen. […]