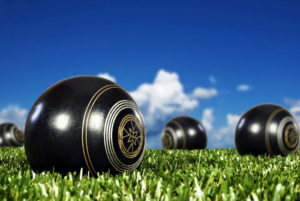 AFTER many years of negotiations with Lyme Regis Town Council, Lyme Regis Bowling Club has announced that they have secured a future at their iconic site on the Monmouth Beach.

Club spokesman Paul Moffitt commented: “We have negotiated a 15-year lease with favourable terms for the car park which was the main bone of contention.

“Now that we have secured our future, we want to update our clubhouse, something we have been loathe to do because of the uncertainty. A new kitchen is planned for later in the year, with the seating also needing updating at a later date.

“With this in mind the club have been holding ‘soup & coffee’ mornings at the club throughout the winter. If anyone feels like supporting us the next date is February 22nd at 11.30 am.

The Monmouth Beach green is named after Charlie Mercer, a former British isles champion and a stalwart of the Lyme club for many years.

There were fears that the town council wanted to move the bowling club, which attracts many visitors to the town, to a different location so the current site could be used for car parking. Members crowded the Guildhall on more than one occasion when the matter was under discussion to put their case.

IN the leagues, Lyme Regis Bowling Club 2 were the most successful with an 8-2 win over Melcombe Regis. Next came the ladies with a 6-2 win over Broadstone Wessex. […]