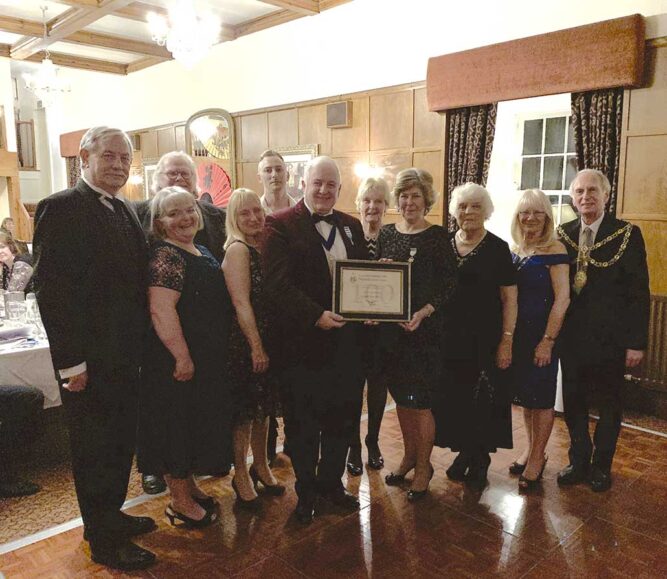 LYME Regis Musical Theatre, formerly know as the operatic society, celebrated its 100th anniversary in sparkling fashion with a centenary dinner in the Oak Room of the Royal Lion Hotel.

About 70 members past and present, patrons and guests sat down to a sumptuous dinner followed by speeches and entertainment by international cabaret artist Paul Roberts.

The society was formed in 1920 and performed its first production, ‘The Mikado’, at the Marine Theatre in 1921. Since then, it has entertained local audiences with 86 different shows.

The society will mark its centenary by performing a concert version of ‘The Mikado’ at the Marine Theatre on August 1 and 2.

A toast to the society was proposed by the Mayor of Lyme Regis, Councillor Brian Larcombe MBE, who was accompanied by his wife Wendy.

Councillor Larcombe asked the audience to imagine what life was like in Lyme Regis was like on 1920 with the country recovering from the First World War and the only entertainment available in the town was that provided by its citizens.

He congratulated the society on its 100 years of entertaining the people of Lyme Regis and district and wished members every success in the future.

Responding to the toast was the chairman of the society, Johanna Hopkins, who has been connected with the society for more than 50 years, appearing for the first time when she was 17 years-old.

She spoke of the achievement of reaching the centenary in such a difficult economic climate.

She said: “But we have weathered the storms throughout that time and it’s been magical to bring so many wonderful shows to our audiences.

“We feel so fortunate to be holding our celebration dinner here at the Royal Lion this evening, as when Lyme Regis Operatic Society finished their shows, long ago, after their final performance they would come here for their supper and drinks.

“Every local town had their own society as so many people lived and worked in their town, and evening pastimes were something to be enjoyed.

“Sadly, these days our society has very few people from the town, but we are so lucky that people from the surrounding area want to be in our shows so that we are still able to put on first class performances and enjoy a well respected reputation.

“We have won various NODA awards in the past and have been nominated for the Councillors’ Choice for our production of ‘Anything Goes’.”

Mrs Hopkins said she would be stepping down as chairman at this year’s annual meeting in September and sincerely hoped that a younger person would come forward to lead the group into the next 100 years.

The evening concluded with the regional councillor for the National Operatic and Dramatic Association, Graham Liverton, presenting Mrs Hopkins with a framed certificate recognising the society’s 100th anniversary.

He spoke of the high regard in which Lyme Regis Musical Theatre was held and praised the high standard of their performances.

The society’s forthcoming production of ‘Chicago’ at the Woodmead Halls in May has been cancelled due to the coronavirus epidemic but it is hoped it can be restaged later this year.

Musical theatre group is ship shape for ‘Anything Goes’

LYME Regis Musical Theatre won rave reviews from audiences as they set sail on the SS American for their recent production of Cole Porter’s classic ‘Anything Goes’. […]

BRASS supergroup, Kick Ass Brass, which includes some of the country’s top jazz and funk musicians, will open this year’s Jazz Jurassica on Friday, May 24 in Lyme Regis. […]