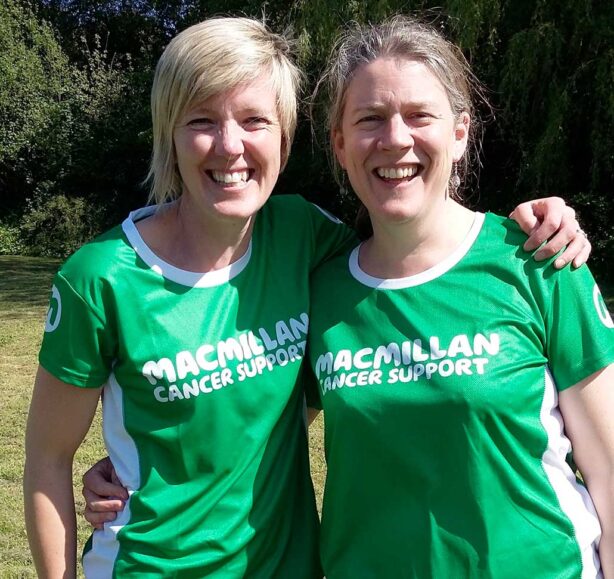 At the start of the year, friends Liz and Alice discussed ways in which they could improve fitness and “do a bit of good” at the same time.

Their shared love of walking provided the solution and, having both had family members affected by cancer, they decided raise funds for Macmillan Cancer Support.

In 2016 Alice came first place in the Jurassic Coast Mighty Hike, walking 22 miles along the coast path from Lodmoor Country Park in Weymouth to Corfe Castle in six hours.

Liz is also no stranger to long distance walking either. Her mum, Denise, was treated for breast cancer in 2005 and the following year mother and daughter took part in the London Moonwalk, a 26.2-mile nighttime walking marathon around London for breast cancer charities.

They also took part in the 2007 Moonwalk and Liz also completed the challenge in 2016.

For their latest challenge, Liz and Alice wanted a change of scenery so have chosen to complete the Thames Path Mighty Hike in aid of Macmillan Cancer Support.  They will be walking the 26 miles from Windsor to Henley along the River Thames on Saturday, July 20.

Training is already well under way with both Liz and Alice planning to do a minimum of three training walks per week in the run up to the event.

They are also hoping to raise £250 each for the charity and are collecting sponsorship as well as holding their own fundraising events.

On Sunday, June 16 they will host a coffee morning in the Lister Room on Marine Parade, Lyme Regis, serving tea, coffee and home-baked treats from 10am to 2pm, alongside a raffle supported by local businesses.

Prizes will include a breakfast for two from The Lyme Bay Cafe Bar; a bag of goodies from Ammonite Fine Foods; a selection of beers from Lyme Regis Brewery; a voucher for Lyme’s Fish Bar; a bottle of wine from Lyme Bay Winery; a cream tea for two from The Bell Cliff; a T-shirt from Boylos and many more.

Alice said: “Macmillan is a charity that is so close to people’s hearts. Everyone seems to know someone who has been affected. We have been amazed by the response so far.”

Liz added: “My aunt told me how my cousin used to look forward to the regular visits that he received from his Macmillan nurses. Sadly, David lost his battle with cancer but the care and support that he received during his illness from Macmillan was invaluable.

“It’s great to be in a position to help give something back. Knowing that we have everyone’s support behind us and this fantastic charity makes it all worth it.”

Top chefs draw in the crowds at Food Rocks

THE popular Food Rocks festival returned to Lyme Regis for the sixth year last weekend, bringing top names and brands from the culinary world to town.  […]