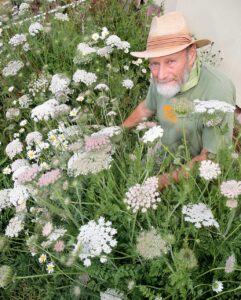 LYME Regis resident Simon Beadles has received an award for his wild garden in Staples Terrace.

Mr Beadles, an ecologist, has been working on his garden for years using only native wildflowers to attract a diverse range of birds, bees and butterflies.

The garden includes 80 varieties of native flowers, including some incredibly rare species such as the narrow-leaved lungwort, wood vetch, the narrow leaved everlasting pea and meadow clary. It also features a seven-foot-tall foxglove and wild teasel.

The garden has now been awarded a prize in the Dorset Wildlife Trust’s annual Wildlife Friendly Gardening Competition and is being filmed for Monty Don’s ‘Gardener’s World’ series.

Mr Beadles said his long-term plan is to release seeds from his rare species to get them growing in the wild again, with permission from authorities such as the National Trust. He is also hoping some of his neighbours may also adopt his approach to gardening.

“It would be great to have more diversity and to see things you have never seen before when out visiting areas such as The Spittles – to take time to just stop and stare,” he said.

About Francesca Evans 2551 Articles
Francesca grew up in Lyme Regis and has worked in community journalism in the area since 2011, having gained a First Class Honours degree in journalism and her NCTJ qualifications at Southampton Solent University.
Instagram Twitter

Get your entries in for Uplyme’s 90th annual Summer Show

EXHIBITORS for the 90th Uplyme & Lyme Regis Horticultural Society Summer Show at Uplyme Village Hall are invited to submit their entry form by 8pm on Wednesday, July 10 ahead of the big event this weekend. […]