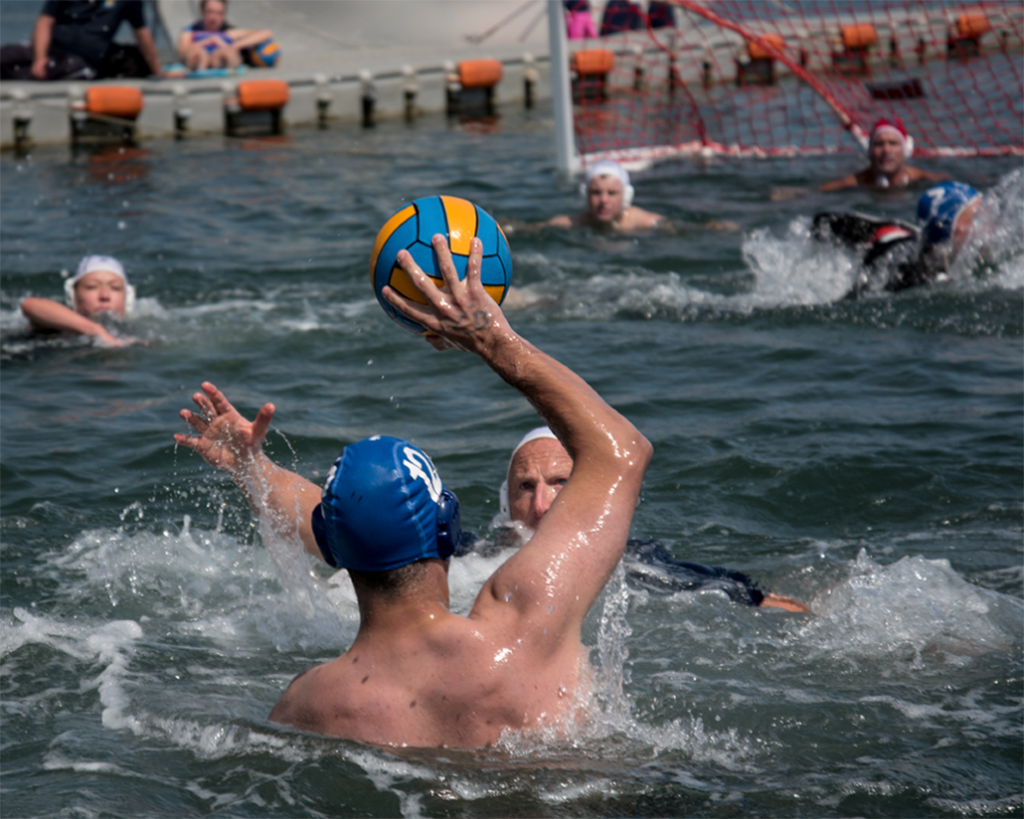 THE second Lyme Splash Water Polo Championship will take place on Sunday, August 5 at 10am, as part of Lyme Regis Regatta & Carnival Week.

The event will take place on the harbour pontoons in Victoria Pool, off the Cobb, and the floating pitch allowing for double the number of last year’s teams, so there is now a total of 12 places available.

Last year’s winners Western-super-Mare, and runners up Welsh Warriors, have already signed up and are back to do battle in the harbour, but organisers are looking for teams to take part from around the country, especially local teams from Devon, Dorset, Somerset and Cornwall.

Teams need to have a minimum of seven players; a goalie and six fielders although 11+ members is usually advised so that ‘subs’ can be bought on to give players a rest. Entry costs £50 per team, although all team members need to register individually at www.lyme-splash.com/water-polo-event/

Dorset based artisanal ice cream maker Baboo Gelato has once again stepped up to sponsor the event, providing the infrastructure needed, winners medals and delicious prizes.

Annie Hanbury, founder of Baboo Gelato, commented: “Baboo Gelato is excited to be sponsoring the Lyme Splash Water Polo Championship for the second year.  The teams last year had so much fun, and the volunteers put in an incredible amount of hard work that made for a wonderful day. This year it’s going to be bigger and better, and we can’t wait.

“Lyme Regis has a fantastic calendar of events all summer long, and we hope this will become a landmark fixture, eventually attracting teams from across the country and beyond.”

The Cobb Centre will be used as a players’ centre, where they can warm up with a hot cuppa and biscuits sponsored by Martin Diplock Chartered Surveyors and Estate Agents.

Bridport Barracudas and Swim England South West Region Water Polo are also supporting the event, providing back up, kit, referees and organising the timetable. West Dorset District Council and harbormaster Grahame Foreshaw MBE and his team have also pulled out all the stops.

Karen Durham-Diggins, chairman of Lyme Splash, said: “It’s exciting to be able to hold our championship again; there has been so much hard work put in to make this happen for a second year. This year the floating pitch will make it easier for spectators to see the games and cheer on their favourite team.

“Once again, our wonderful sponsors and volunteers have excelled themselves – without them this event couldn’t take place.”

Lyme Splash aims to promote water sports in Lyme Bay and raise funds for both local and national charities. It will also be hosting its third annual Lyme Regis to Charmouth Swimming Challenge on Sunday, September 2, although places for this are already fully subscribed.

Lyme Splash is also holding a raffle, with first prize being a £625 woodworking course at Lyme Regis Boat Building Academy. Tickets will be sold on the day of the water polo event or can be bought online at http://www.lyme-splash.com/polo-raffle/ for £1 each.

Candles On The Cobb support for sailing club’s youth section

THE Youth Section of Lyme Regis Sailing Club have been very fortunate recipients of a final grant from the original Candles on the Cobb committee, led by Phil Street, Mike Higgs and Les and Herbert. […]

LYME Regis based reforestation charity, The Word Forest Organisation, will be hosting its first event at its new headquarters next week.  […]