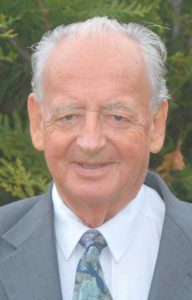 He will serve under the Mayor of Lyme Regis, Councillor Brian Larcombe MBE, until the end of his current term of office in May.

He was then elected unanimously, despite not being present at the meeting.

Councillor Williams has served on Lyme Regis Town Council for more than 50 years and was mayor from 1997 to 1999. He has also previous served a deputy mayor.

TOWN councillors have expressed some surprise that legal action has been taken which could see Lyme Regis Power Boat Club removed from its Monmouth Beach clubhouse. […]

Roads to close for Guildhall repairs

CHURCH and Bridge Street in Lyme Regis will be temporarily closed while repairs are carried out to the Guildhall. The town council has applied to close the roads between 4pm and 8pm from March 12th […]

East Devon offers funding for those in financial difficulties

EAST Devon District Council has been allocated a £181,487 share of funding to support residents whose immediate essential needs are not being met. […]