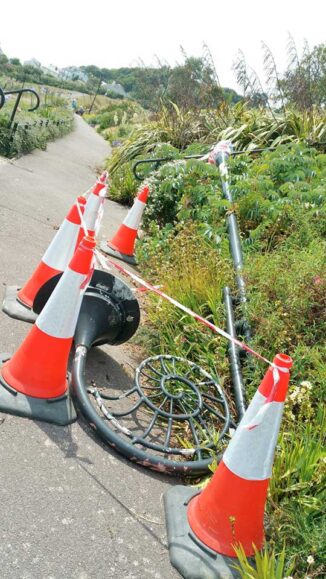 VANDALS recently targeted Langmoor Gardens in Lyme Regis, snapping a lamppost in half, stealing a CCTV camera and cutting off the public wi-fi system.

Dorset Police are appealing for witnesses following an incident of theft and vandalism in the seafront gardens at approximately 11pm on Friday, June 28.

A CCTV camera attached to a lamppost was stolen and the ammonite lamppost was also snapped in two. A secure box at a nearby location was also broken into and wires including those for the public wi-fi system on the seafront were cut.

Anyone with information regarding this incident should contact Dorset Police on the non-emergency 101 number, quoting occurrence number 55190102701, or report it by using the online facility on the Dorset Police website.

THE headteacher of The Woodroffe School in Lyme Regis has said students feel “let down by the government” following the release of A-level results last week. […]

A POLICE presence has returned to Lyme Regis and Charmouth with Police Community Support Officer (PCSO) Amanda King now based in the area. […]