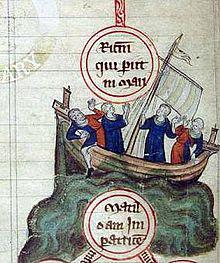 BEFORE the coronavirus pandemic struck, the Lyme Regis/Barfleur Twinning Association had been hoping to mark an historical anniversary which vividly illustrates the shared history of our two countries in the aftermath of the Norman Conquest.

The White Ship, known in France as ‘La Blanche-Nef’, sank in the English Channel, just off Barfleur in Normandy, on November 25 1120 with the loss of all but one of the nearly 300 persons on board.

This tragic incident had serious implications for the English throne; amongst those who drowned were William Adelin, the son of King Henry I, as well as the king’s illegitimate offspring Richard of Lincoln and Matilda Fitzroy, Countess of Perche.

The disaster left Henry I with only one legitimate heir – another daughter named Matilda. A woman had never ruled in England in her own right and, although Henry forced his barons to swear an oath of allegiance to Matilda, she was never popular.

On Henry’s death in 1135, his male relative Stephen of Blois stepped in to usurp Matilda and seize the throne, with the support of many English nobles.

Stephen’s hold on the throne was precarious and both the Welsh and the Scots took advantage to repeatedly raid the north of England.

In an effort to win back control, Matilda and her husband, Geoffrey of Anjou, fought Stephen and his allies in a long and bloody civil war that lasted more than 10 years and caused widespread devastation across the country.

Eventually the warring parties agreed a compromise, whereby Matilda’s son Henry Plantagenet would succeed to the throne on Stephen’s death and the period from 1135 to 1153, when Stephen died, is generally referred to as the Anarchy.

Henry of Anjou, also known as Henry II, was a strong king and a brilliant soldier, and his accession marked the beginning of the Plantagenet dynasty.

Lyme’s French counterparts in Barfleur, together with other towns in Normandy, had been planning several local and regional events to commemorate 900th anniversary of the White Ship Disaster. Members of the Lyme Regis association were looking forward to joining in, as part of their 2020 twinning visit.

They has also intended to commission a painting by a local artist to be presented to the Mayor of Barfleur during their visit, as a gift from the people of Lyme Regis, coupled with a presentation of a copy of the picture to Lyme Regis Town Council. The precise subject matter of the painting was still under discussion when the potential impact of COVID-19 became apparent in February this year.

It was soon obvious that any kind of public event, whether in the UK or France, was unlikely to go ahead and the current travel restrictions mean that the twinning visit to Barfleur this year has regrettably been cancelled.

A spokesperson for the association said: “This is especially sad as the 900th anniversary of this little-known, but nevertheless important historical event is now likely to pass unmarked and unnoticed.”

The association have shared this historical story, in the hope that some light can be shone on it for the 900th anniversary, despite the current coronavirus restrictions.

HISTORICAL buildings around Lyme Regis will be opening their doors this month for the national Heritage Open Days scheme. […]

AN illustrated talk on Charmouth’s “tragic hero” James Warden will be held on Thursday, March 7 at 7pm. […]