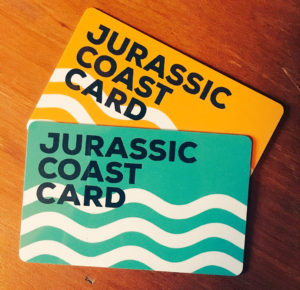 RESIDENTS and visitors of the Jurassic Coast can now receive discounts on days out, food and drink, products and services thanks to a new membership card scheme.

The Jurassic Coast Card was set up by Amy Ralph, who was inspired by the people she’s met and businesses she’s discovered while writing her popular blog, Fossils in My Pockets.

The membership discount card is aimed at getting more people out exploring the Jurassic Coast and all it has to offer, all year round.

Amy said: “I was so impressed by the range and quality of the businesses, products and people I’ve found through the blog, many of whom I had no idea about even whilst living just down the road. I thought if I could save people money, they would try new places and discover new things.

“I am hoping to get locals feeling more like they’re on holiday on their own patch – having days out, going for family meals, pottering around the towns and generally spending time exploring some of the amazing places that we, as residents, often take for granted.

The card costs £24 for an Annual Pass and £10 for a Holiday Pass, which provides discounts on days out, meals, food and drink, products, services and trades. The easily searchable website lists all businesses taking part for ideas and inspiration.

Many offers are generous enough that they pay for the card just in one use.

“With no cost to businesses to join, and the benefit of extensive promotion, businesses of all shapes and sizes have been able to sign up,” said Amy.

“Amongst the first were Reeves & Reeves, a local jewellery company, and Devon Country Pursuits, who do Segway and quad bike adventures, which shows the range of what we’ll be promoting. Some are so new they’ve joined before they’ve even opened, such as Dorset Mud Trail and The Butchers Block restaurant in Kilmington.

“Going door to door and meeting as many businesses as possible has given me a whole new insight into the pride and passion people have for their crafts, businesses, towns and communities, and if I can help people communicate that, I see it as a massive boost for everyone involved and hopefully the area as a whole.”

To sign up for a membership card to to join the scheme as a local business, visit the website  www.jurassiccoastcard.co.uk

About Francesca Evans 2230 Articles
Francesca grew up in Lyme Regis and has worked in community journalism in the area since 2011, having gained a First Class Honours degree in journalism and her NCTJ qualifications at Southampton Solent University.
Instagram Twitter

Man abused and spat at after car park collision

A MAN was verbally abused and spat at after a collision in Holmbush car park, Lyme Regis.  […]

Popular Lyme restaurant up for sale for £1.3million

THE popular Bell Cliff Restaurant & Tea Room in Lyme Regis has gone up for sale for £1.3million.  […]

Council tax to rise by £5 in West Dorset

WEST Dorset councillors have approved the budget for 2018/19 after balancing the books for the current year resulting in a £5 increase in council tax for Band D properties. […]