A TWO-minute silence was observed over the weekend by what is thought to be one of the biggest Remembrance Sunday crowds seen in Lyme Regis.

Crowds lined the streets for the annual Remembrance Sunday parade, led down Broad Street to St Michael’s Parish Church by the Mayor of Lyme Regis, Councillor Michaela Ellis, her civic party and members of the Royal British Legion.

Although the procession was slightly depleted this year, following the closure of the Woodroffe School’s Combined Cadet Force earlier this year, it was still well attended by local organisations, retired and serving members of the Armed Forces.

The procession was followed by a special Remembrance Sunday service in the church, led by the Reverend Jane Skinner – her last service as team vicar for the area before moving to a new benefice in North Devon.

Hymns were accompanies by Alex Davies on the organ and Lyme Regis Town Band, while St Michael’s Children’s Choir gave a moving performance as local organisations laid poppy wreaths at the alter.

The mayor gave the lesson and prayers were led by the Reverend Keith Vivian. The Reverend Skinner also interviewed Kevin Taylor, parade marshal with the Lyme Regis branch of the Royal British Legion, about his military career and what Remembrance Sunday meant to him.

Philip Evans MBE, president of the Royal British Legion, read the town’s Roll of Honour – the names of all men from Lyme Regis who died in the First and Second World Wars – followed by the Exhortation.

After the service, the procession formed up and marched past the war memorial in Monmouth Street before making its way to Cobb Gate where a large crowd of residents and visitors gathered for the two-minute silence, followed by the national anthem.

Following the traditional Remembrance Sunday commemorations, crowds made their way to the beach for the unique Pages of the Sea event, created by award-winning film producer and director Danny Boyle to mark the 100th anniversary of the end of the First World War.

Lyme Regis was one of 30 seaside towns across the country chosen to take part in the event, which saw a portrait of Rifleman Kulbir Thapa VC – who made history as the first Gurkha to win a Victoria Cross – created in the sand by volunteers, including art students from the Woodroffe School.

Members of the public were also invited to create their own silhouettes of soldiers on the beach.

An open mic session was held on Marine Parade, where members of the public could share poems and songs on the theme of Remembrance. Acclaimed singer-songwriter Billy Bragg read a poem written by British poet and playwright Carol Ann Duffy especially for Pages of the Sea, as well as performing some of his own work.

The day was finished with Lyme taking part in the national ‘Battle’s Over’ events in the early evening, which included the lighting of a beacon by the mayor and her consort on the North Wall.

The Last Post was played by Denis Bye and another two-minute silence was observed before town crier Alan Vian gave a special cry to mark the event, and the bells were rung at St Michael’s Parish Church. 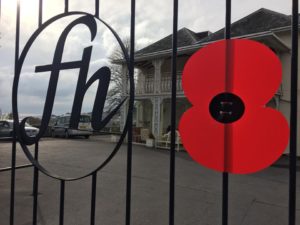 BUSINESSES and organisations across Lyme Regis marked Remembrance in their own way, including Fairfield House.

Both the exterior and interior of the residential home was decorated with poppies, bunting and commemorative flags in memory of those who fought and lost their lives in the world wars.

On Armistice Day, the residents had a full day of reminiscence, watching the parade and service at the Cenotaph in London on the big screen in the main lounge and and later sharing their memories with staff about their experiences during wartime.

In the afternoon, tea and poppy decorated cupcakes, baked by the staff, were enjoyed by all while watching the film ‘War Horse’.

For more pictures from Remembrance, visit the LymeOnline Photo Gallery

Forget summer, it’s just three months until the switch on!

IT may have been one of the hottest weekends of the year, but one group of fundraisers were looking ahead to Christmas over the recent Bank Holiday. […]

Guitars On The Beach still currently going ahead

ORGANISERS of Guitars On The Beach have said the event is currently still set to go ahead, but this could change if more stringent measures to tackle coronavirus are implemented. […]