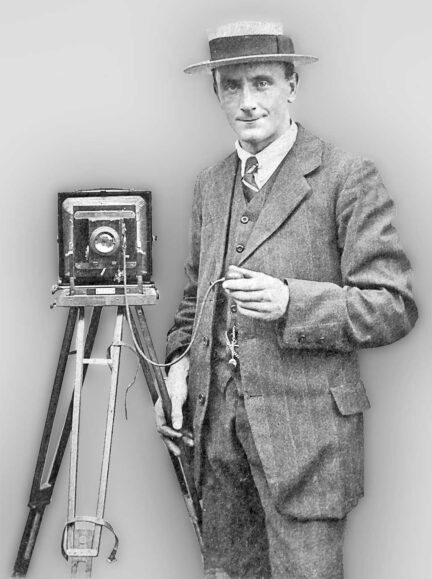 PERCY Bird was an extraordinary man. By day he worked on the railways – but in his spare time he developed brilliant photography skills, recording the events and views of Lyme Regis, most from between 1930 and 1950 which have never been seen – until now.

A collection of Percy’s fantastic work will be shown at the Woodmead Halls on Sunday, February 10, starting at 2.30pm in a presentation sponsored and organised by LymeOnline.

The event has the full support of Percy’s family with proceeds from the entrance fee being donated to charity.

A commentary on Percy’s ‘Bird’s Eye View’ will be given by Ken Gollop, famous in Lyme for his hugely popular ‘Under Shady Tree’ presentations. Award-winning local photographer Richard Austin will also be present to comment on Percy’s photographic skills.

Percy’s collection of more than 800 glass negatives of local views and scenes, hitherto unseen, were discovered by his grandson, Rob Wheeler, when clearing out the roof of the family home at the bottom of Hill Road where Percy spent the last years of a fascinating life.

Rob, a keen and talented photographer himself, has painstakingly reproduced prints from the negatives and brought them to our attention.

So with Rob’s approval and that of his family, we have decided to show a selection of Percy’s work under the title of ‘Bird’s Eye View’ at the Woodmead Halls on February 10.

And there was another fascinating aspect to Percy’s life. Always immaculately dressed, he also collected telescopes and musical squeeze boxes and rode a classic motorcycle. His family were blissfully unaware of most of this.

Percy Bird was born in Kings Nympton. His parents were Henry and Annie Bird, who worked for Lord and Lady Rolle at Bicton Gardens. Henry was a groundsman and gamekeeper.

Lord and Lady Rolle recommended Percy for a job on the railway when he was 15 years- old. He started off as a steam engine cleaner and worked himself up to a steam engine driver. He drove the main line Exeter to Waterloo for some time.

He married May Cozens, daughter of Charles George Cozens and Bertha Ash Hill (Cozens) in 1913. Percy and May moved to Exeter where Percy worked and had children – Charlie, who was born in Uplyme; then Bill, Jack, Clifford, Sheila (later to marry Lyme builder Sam Wheeler), and Joan who still lives in Lyme. They also had two other boys George and Lesley, who died very young.

Percy and May decided to move back to Lyme to live and had a house built in Colway Lane called Belvedere.

In 1936 Sheila and Joan were sent on there own to travel by train to move to Lyme. Sheila was nine years old and Joan was four. They stayed with a sister of May, Effie Love, who lived with Bert in Corporation Terrace (now Lym Close).

Percy, May and Clifford moved soon after their new house was built. Percy then drove the steam engine on the Lyme to Axminster branch line.

Percy had a few other hobbies including high powered telescopes, playing the concertina, mouth organ and cello and other instruments and he also liked top-of-the range motorcycles.

He always had a camera in his hand and developed his own pictures and specialised in stereo glass slides and the viewing equipment which was in 3D even at that early time. He developed many of his pictures under the stairs at Belvedere.

Percy took early retirement in 1948 because of heart trouble. He sold Belvedere and got a caravan in Devon which was transported to Les Feltham’s field in Haye Lane most summers.

When Percy got older he moved to to Sheila and Sam’s house in Mill Green Court where Mrs Wheeler looked after him in a little garden flat. He died in 1978. ‘Bird’s Eye View’, Woodmead Halls, February 10, 2.30pm

About Philip Evans 817 Articles
Veteran journalist and newspaper manager Philip Evans has worked in the publishing industry for more than half a century. He started out as a reporter for Pulman’s Weekly News as a young man and went on to work for an international publishing company in the UK, South Africa and Australia before returning to Lyme Regis where he is still reporting on local events as he has done for more than 53 years.
Twitter

Memories are made of this…

APART from having the occasional pop at the council, over the years this column has been filled with memories. Memories of growing up in Lyme in the 1950s-60s, memories of big and tragic events in the town and memories of its people past and present. Many of them unforgettable characters. […]

AS the Marine Theatre in Lyme Regis comes to the end of its 125th anniversary year, a special community play will be staged to mark the milestone. […]

FOR more than 40 years Lifeboat Week has been one of the highlights of summer in Lyme Regis, drawing holidaymakers in their thousands to the town known. It all started as a lifeboat day back […]