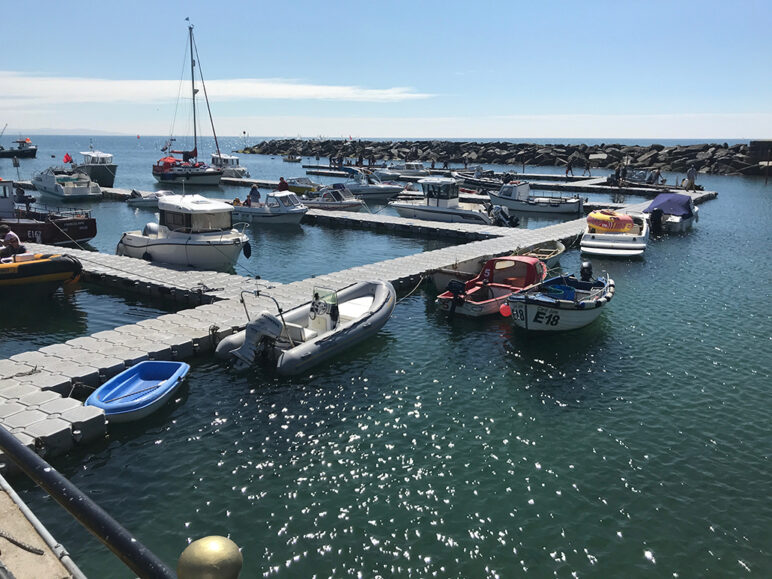 FIGURES for Lyme Regis harbour were down this year with a predicted overspend of £75,600 – partially due to a series of south easterly winds which stopped pontoons being used and unexpected repairs.

Interim harbourmaster James Radcliffe, who took over from Grahame Forshaw MBE when he left in July, said that on 17 occasions the pontoons had to be broken down for safety reasons, compared to just once during the previous season.

The cost of this in lost income has been put at around £10,000 less than expected.

“It has made a big difference to our figures,” he told the Dorset Council Harbours Committee.

Despite this, payments for single launches were up from 180 to 217, also attributed to the weather.

The harbour budget is currently predicted to have a £75,600 overspend at the end of the financial year, mainly due to unexpected repairs to the slipway, repairs and maintenance to the JCB and legal costs of £31,000 for the Harbour Revision Order.

Looking to the year ahead Mr Radcliffe told the committee that it was hoped that work on extending and repairing the slipway could be completed without the need to formally ask for planning permission.

He said that ground chains and weights would now have to be used to secure pontoons as piles were no longer considered a viable option due to a predicted cost rise of £400,000 due to nature of the seabed in the area.

Mr Radcliffe said he hoped that an EMFF grant secured to help with the cost of piles could be transferred to the alternative method.

Other plans include work on the Harbour Revision Order which had now been approved by Dorset Council and has a budget of £31,500 over two years.

About Francesca Evans 2345 Articles
Francesca grew up in Lyme Regis and has worked in community journalism in the area since 2011, having gained a First Class Honours degree in journalism and her NCTJ qualifications at Southampton Solent University.
Instagram Twitter

LYME Regis has been ranked the 21st top seaside town in the UK, according to a new survey by consumer magazine ‘Which?’ […]

Wareham Forest fire the ‘most devastating in living memory’

OVER the past week, local fire crews have been among those tackling a wildfire at Wareham Forest – described as one of the most devastating forest and heath fires in Dorset in living memory. […]

ST Michael’s Pre-School in Lyme Regis has been saved from immediate closure. […]