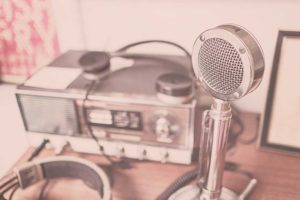 Local residents Chris Tipping and Simon West are now delighted to reveal that they have secured a £8,819 National Lottery Awards for All grant to build a community station, Lyme Bay Radio, and they are aiming to go live with their first broadcast soon.

Chris and Simon are the driving force behind what is shaping up to be a vibrant and informative community radio station, serving locals and visitors to the area alike.

The station is set to deliver a wide range of presenter-led shows featuring a diverse selection of music from the 60s through to modern day pop. It will be woven together with hot-off-the-press news from local and national media outlets, including LymeOnline.

Simon is the former chairman of Apple FM, which broadcast in Taunton. He took the station from being Musgrove Park Hospital Radio to an incredibly popular community radio station, delivering more than 94 hours of live content every week.

Apple FM had a great presence at live events in the area, including the Taunton Flower Show, and its talented team of volunteer presenters did an outstanding job of painting visual pictures of what was going on, for remote listeners to enjoy.

The Lyme Bay Radio team are keen to train volunteers to help with outside broadcasts at local events such as Lifeboat Week, the carnival and, of course, at the many musical and food festivals that take place in Lyme Regis.

Simon explains: “We’ve already got a great mix of live shows lined up from locals who are keen to be presenters and a few syndicated programmes too.

“We’ve decided to broadcast digitally, rather than via an FM frequency, mainly because so many parts of Lyme Regis have such trouble picking up a decent signal due to the topography in the area.

“Many radio fans listen to their favourite media via phones, tablets and computers these days anyway and we’re going to make the tuning in process as easy as eating pie.

“Broadcasting digitally also means we can reach people who are planning to come to Lyme for a holiday. They can tune in before they’ve even packed their cases to find out what’s happening here and to see if there are any special events lined up.”

Chris added: “This project has been 18 months of hard work and tenacity in the making and I’m delighted we’re finally able to announce its imminent arrival. We already have a few corporate sponsors lined up to ensure the station can become a self-sufficient, not for profit facility, led and designed by our local community.”

The station has been set up as part of local charity Lyme Regis Development Trust, which strengthens their message to serve the community of Lyme Regis.

The success of it will be dependent upon having a strong bank of willing volunteers who are prepared to learn the ropes. They’ll be needed to present programmes and do outside broadcasts, but none of that will be possible without a solid back office team of engineers offering technical support, producers, researchers, designers and admin assistants.

About Francesca Evans 2140 Articles
Francesca grew up in Lyme Regis and has worked in community journalism in the area since 2011, having gained a First Class Honours degree in journalism and her NCTJ qualifications at Southampton Solent University.
Instagram Twitter

Wear your poppy with pride this weekend!

8th November 2019 Francesca Evans All Over The Town, Blogs 0

HALLOWEEN was celebrated in style, bonfire night went off with a rather blustery bang, and now our attention turns to a more solemn occasion as we mark Remembrance this weekend. […]

Syrian supper to be held for Uplyme Community Sponsorship scheme

THE Uplyme Community Sponsorship Scheme, which is aiming to raise funds to resettle a refugee Syrian family in the area, will host its first fundraising event on Saturday, March 16. […]

THERE is a popular misconception that being a councillor makes you more clever than other people. I don’t know where this belief stems from, I suppose that it dates back centuries to the days when […]