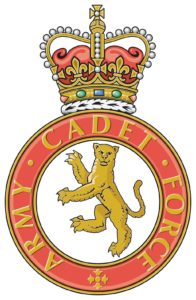 FOLLOWING the announcement that a new Army Cadet Force (ACF) would be set up in Lyme Regis, public meetings will be held for all parents and potential cadets on Tuesday, October 9.

The meetings will provide parents and young people the chance to learn more about the ACF, what kind of activities in includes and to meet Colonel Richard Taylor, the County Commandant who has been working with town and district councillor Cheryl Reynolds to set up the new branch.

Meetings will be held at 6pm and 7.30pm in the Guildhall on Bridge Street.

Councillor Reynolds commented: “It has been a pleasure to be involved and to make this work for all the youngsters in the area.”

The establishment of a new ACF in Lyme Regis comes following the controversial closure of the Combined Cadet Force at the Woodroffe School, and it is hoped former members of this will join the new branch.

The Army Cadet Force has nearly 40,000 cadets in more than 1,600 detachments all over the country and is one of the biggest and best clubs around.

A spokesperson for the ACF said: “When it comes to fun, friendship, action and adventure, it’s hard to find anything that beats the Army Cadets.

“There will also be plenty of chance to play all your favourite sports because the ACF has competitions for both boys and girls at county, regional and national level.

“So you might end up a little wet and muddy, but wouldn’t you rather be having the time of your life with some great new mates, instead of just sitting in front of a TV or computer alone in your room?”

Members must be aged 12 by September 1 at the start of Year 8 in school, and under 18 years.

HARBOURMASTER Grahame Forshaw MBE will leave Lyme Regis next month after 10 years in the post. […]

Hopes for Red Arrows to return to Lyme in 2020

IT is hoped the Red Arrows will once again perform their breathtaking aerobatic displays over Lyme Regis next summer. […]